The field of biological control in its nature is a collaborative one. Many cactus species native to South America, are invasive in South Africa. In February 2020, two CBC researchers, Phillippa Muskett and Iain Paterson, spent two weeks doing fieldwork in Argentina and Uruguay. Here Phillippa gives some insights into this trip and her first time in South America.

“In early February, I had the incredible opportunity to do a field trip through parts of Argentina and Uruguay in search of a new biological control agent for Opuntia elata, also known as the Riverina Pear cactus.  Opuntia elata is an invasive cacti that’s becoming increasingly problematic in the central parts of South Africa where it is spreading across arable land. Finding an effective agent for Opuntia elata was the main aim for the trip but we also needed to collect host specificity test plants and a potential biological control agent for Tamzin Griffith’s PhD research on the invasive cactaceae Trichocereus spachianus. Tamzin is a CBC PhD student currently based in Buenos Aires.

This incredible trip took me from Buenos Aires to Mendoza, and then on to Mercedes, Corrientes, and across to Uruguay. It was all made possible by the highly productive collaboration between the Centre for Biological Control (CBC) and the Fundación para el Estudio de Especies Invasivas (FuEDEI) in Argentina, specifically Dr Guillermo Logarzo, Dr Laura Varone, M. Belén Aguirre, Ana Faltlhauser and Tomás Righetti from FuEDEI.

With one day to show me Buenos Aires, Tamzin got my trip off to a whirlwind start with a colorful tour of Buenos Aires City, which she is currently her backyard while she’s based at FuEDEI. Turns out that jet lag isn’t a problem if you just tour a city on four hours sleep! I couldn’t have asked for a better host while I was in Buenos Aires. I must also mention that we might still be lost down a beautiful alleyway in the city center without the patient translations and instructions from Ana Faltlhauser. I was then warmly greeted by the FuEDEI team in Hurlingham, Buenos Aires and got to see what Cactaceae research looks like from the other side of the world, where conserving their indigenous and sometimes endangered species is the goal In South Africa, all but one cactaceae species are alien and many are invasive so we work to control them.

Tamzin, Ana and I then headed to Mendoza in the Arid North West of Argentina. Although Mendoza seemed to be getting its yearly rainfall over the three days that we were there, we managed to successfully collect the columnar cactus, Cereus aethiops for Tamzins host specificity testing. We also searched, sadly in vain, for the mealy bug Hypogeococcus festerianus on Cereus aethiops which could be a biocontrol agent for Trichocereus. spachianus and Dactylopius zimmermanii on the cactus Tephrocactus aciculatus, which we were hoping to sample for a genetics project. We did however find a species of cochineal on Opuntia sulphurea which could be beneficial in the future. The area was spectacular, the Malbec even better and I got my first taste of just how hard it was going to be to find cochineal in the native range, where natural predators roam and control the population numbers. 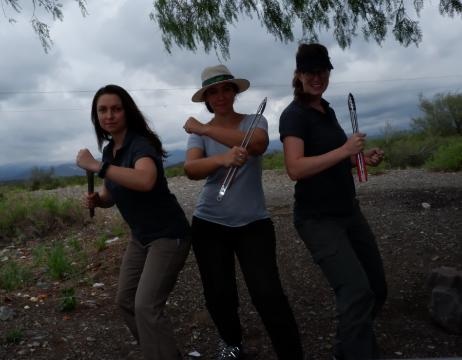 The cactus crew - from left Tamzin Griffith, Ana Faltlhauser and Phillippa Muskett  - in the field in Mendoza, Argentina

Once back in Hurlingham, Dr Iain Paterson joined us for the next section of the trip. An informative day was spent at FuEDEI before Dr Guillermo Logarzo, Tamzin, Iain and I then went on a four-day trip into Corrientes province from Buenos Aires. We traveled to Concordia, Entre Ríos; Mercedes, Corrientes and then on to Santa Fe and back to Buenos Aires. Along the way we visited and collected genetic samples from fifteen Opuntia elata sites, mostly using coordinates from a previous trip done by Dr Laura Verone, and managed to collect cochineal (Dactylopius spp.) on Opuntia elata at one site and Opuntia rioplatense at two sites. Opuntia rioplatense is closely related and morphologically similar plant to Opuntia elata. There a is debate about the potential for increased efficacy of biological control agents on Cactaceae that evolved on a close relative to the target plant instead of evolving on the target species. Collecting insects off both species means that we can test for the most effective biological control agent for the invasive Opuntia elata in South Africa. These populations of cochineal are now being tendered to by the incredibly capable hands of Tamzin, Laura and Belén at FuEDEI until they can secure a permit to send them out to South Africa and I can’t thank them enough. Tamzin also collected a test plant called the cactus, Harrisia martini north of Mercedes for her PhD.

Iain and I then headed across the Rio de La Plata to Uruguay. We traveled from Colonia del Sacramento to Paysandú and then inland to Tacuarembo before heading down to Montevideo. Along the way we visited thirteen more sites but sadly didn’t find any more cochineal. We did collect genetic samples at each site which will help us identify the origin of the invasive Opuntia elata in South Africa. After a long layover in Sao Paolo, where we opted to venture into the city and were rewarded with a sighting of some capybaras (the world’s largest rhodents!), we got on a long flight home. Thank you to everyone that contributed to making this trip a resounding success!”