Tapiwa Mushore, MSc student, joined the CBC team in early 2019 to focus on finding a natural solution to controlling the pests of Honeybush tea. This unique herbal tea, with a pleasant honey like taste and flavour, has gained economic importance due to increased demand both globally and locally.

This increase in demand has led to a recent shift from wild harvesting to commercial cultivation. Successful large-scale cultivation of Honeybush faces several challenges, including insect pests - an integral part of the ecosystem and usually found coexisting with their hosts. Limited information exists on the impact of pests in Honeybush and how they shape the ecosystem. If the shift from wild harvesting to commercial cultivation is to be achieved, insect pests associated with Honeybush need to be understood – hence the focus of Tapiwa’s MSc.

During his research over the past few months, Tapiwa has identified the leafhopper Molopopterus sp., as an important pest in cultivated Honeybush. The pest causes high levels of damage to the plants, both the adults and nymphs suck plant sap causing “hopperburn”. This directly affects both the quality and quantity of Honeybush tea yield. There are currently no recommended management protocols to control this pest. Therefore, the successful management of the leafhopper relies on an in-depth understanding of its plant-pest interaction, for which Tapiwa’s research is vital. It is against this background that Tapiwa has conducted his studies on pest bionomics. Host preferences and population densities have been conducted to help formulate biological control options. Tapiwa conducted multichoice experiments with the leafhoppers in tunnels at Rhodes University, which showed strong host preference towards Cyclopia longifolia, one of the most cultivated species of Honeybush. In his field surveys to examine correlations between plant characteristics and pest densities, he found pest density surges in recently harvested Honeybush stands with densities differing between farms.

He also found that population densities decreased as plants aged. With improved understanding of the pest, a biological control option using entomopathogenic fungi - soil-borne fungi which specifically infect and kill insects - was considered. Entomopathogenic fungi are an alternative and attractive method for the management of leafhoppers since their pathogenesis process does not require ingestion, but rather direct contact. To this end, Tapiwa worked on collecting fungal isolates, mostly of the species Metarhizium anisopliae, from Honeybush farms. He then screened these in the laboratory for virulence against Molopopterus sp. adults and nymphs. Several isolates were observed to cause high mortalities amongst adults, with bioassays against nymphs still in progress. 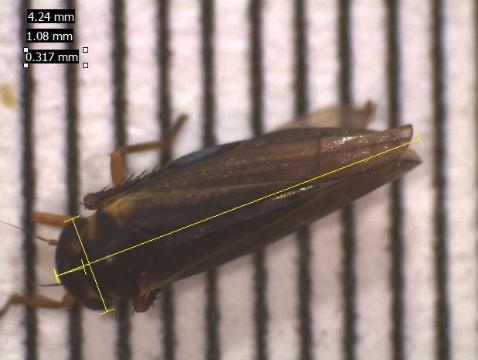 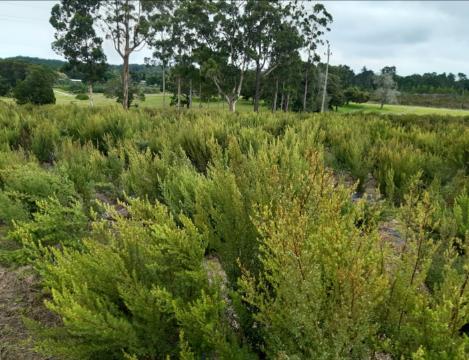 The adult leafhopper, Molopopterus sp, as observed under a dissecting microscope (left) and a field of Honeybush tea plants (right)