Friday, 12th October 2018 marked a historic event for the Centre for Biological Control (CBC) with the release of a biological control agent, the fly, Hydrellia egeriae, to control a submerged aquatic weed Brazilian waterweed (Egeria densa). This took place at the Nahoon River in East London, witnessed by about 50 people from a range of environmental sectors, as well as the media and CBC staff and students.

This release is a momentous occasion for CBC, and biological control community at large, as:

Brazilian waterweed (Egeria densa), is a submerged oxygenator plant, native to South America. It is used in fish tanks and the aquarium trade contributed largely to its distribution throughout the world and South Africa. It is also frequently used in school experiments and improper disposal can initiate new infestations. It was first recorded in South Africa in 1963 and has since become established in freshwater bodies in the Western Cape, Eastern Cape and KwaZulu-Natal.

Brazilian waterweed reproduces vegetatively, any plant fragment, even as small as 1cm, can develop into a new plant. The rapid growth rate of the plant allows it to form dense monoculture stands that choke freshwater bodies, change ecosystem functioning and reduce recreational activities such as boating, fishing and swimming.

The fly that was released is a leaf mining fly in the family Ephydridae. Adults live on the water surface and females lay eggs on protruding leaves of the Brazilian waterweed. The fully aquatic larvae mine and feed on the photosynthetic tissue of the leaves, which reduces the plant’s photosynthetic capacity and induces secondary infection – this damage impacts the plant and reduces its biomass and invasive impact in a water body. It was these larvae (about 10 000 - mass reared at a facility in Grahamstown) that were released into the Nahoon River.

You might be wondering - how do we know that that insect won’t start eating something else? 70% of herbivorous insects are specific to their host plant, which means that they can only feed, survive and reproduce on one species of plant, or closely related plants. We test these potential control agents extensively in quarantine to make sure that a) they are host specific, they only feed on the target weed, and b) they are sufficiently damaging to reduce the vigour of the plant.

Rosali Smith, current CBC PhD student, did all of the testing of the fly Hydrellia egeriae for her Masters, which she started in December 2015, and after satisfying the above conditions, applied for release just over a year ago, and permission was granted in June this year. Rosali Smith has had many mentors along the way, and the CBC would like to acknowledge Dr Willie Cabrera Walsh from FUEDEi in Argentina who first collected this fly and sent it to California; Dr Rosie Mangan, an Irish postdoctoral fellow who was based in the CBC lab and gave Rosali incredible support for this project, and colleagues from the USA who provided advice and troubleshooting along the way - a truly international collaborative programme, which is inherent in weed biological control.

With the release of the fly, we aim to see a reduction in the density of this weed, and the recovery of indigenous flora and fauna, to create a functioning aquatic ecosystem. We will be making further releases around the country, as well as regular post-release monitoring to determine wherever the fly has established and what the levels of damage are.

Well done to all involved in this release, especially Rosali Smith for her dedication to this project. We look forward to seeing the positive results of this collaborative work! 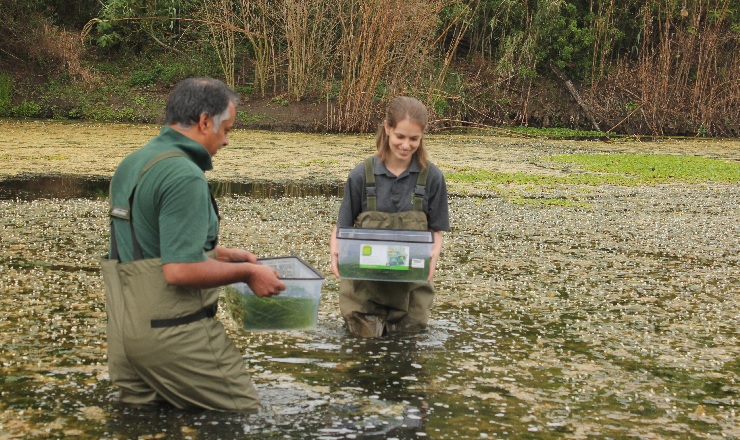 Mr Ahmed Khan, Director of Operational Support and Planning in the Department of Environmental Affairs (DEA) assisted Rosali Smith (CBC PhD student) with the release of the fly larvae into the Nahoon river (Photo: Kim Weaver)