The Centre for Biological Control (CBC) has a long standing collaboration with the Fundación para el Estudio de Especies Invasivas (FuEDEI), based in Buenos Aires, Argentina. The CBC has collaborated widely with FuEDEI, looking at both aquatic and terrestrial invasive species. In December 2019, two CBC staff members, Matthew Paper and Benjamin Miller, had an opportunity to do some collaborative fieldwork in Argentina over a two-week period. Matthew shares some of his experiences from the trip.

“The good collaborative nature between the CBC and FuEDEI provided myself and fellow researcher Benjamin Miller with a fantastic opportunity to travel and work in the wetlands of Argentina. This was in relation to research that the CBC has been conducting with the biological control agent Cornops aquaticum (water hyacinth grasshopper) for the control of Pontederia crassipes (water hyacinth) as well as on the most recently released agent for water hyacinth in South Africa, a leafhopper, Megamelus scutellaris. The trip’s aim was to collect the water hyacinth grasshopper from its most southerly distributions, from Buenos Aires province to Corrientes province, in order to establish a more cold tolerant strain of the grasshopper in South Africa. One of the key failings of this otherwise effective agent in South Africa, is thought to be its inability to survive extended, cold winters, as South Africa is considered a temperate region while northern Argentina (from the native range of the species) is more tropical. The second aim of the trip was to identify the presence or absence of parasitoids within various Megamelus scutellaris populations in Argentina and to identify and compare these to those recently found in South Africa.

On my arrival in Argentina, I was given an incredibly warm welcome by the research team and students at FuEDEI. Dr. Willie Logarzo, director of FuEDEI and Dr. Alejandro Sosa, the lead researcher collaborating with the CBC, hosted myself and Benjamin’s research during our stay. I was given a brief respite for the day to recover from the flight but the following day we started our cross country trip, through the central and north eastern parts of Argentina to find the water hyacinth grasshopper and leafhopper. We were accompanied by FuEDEI PhD candidates Tomás Righetti and Anna Falthauser who are already part of the CBC family having previously visited the CBC earlier in 2019. Also accompanying us was Tamzin Griffiths, a CBC PhD student based in Argentina and is working on Trichocereus spachianus, an invasive cactus in South Africa which is native to northern Argentina.

Our field trip took us from Buenos Aires -  skirting north towards the city of Corrientes - along the Paraná River. We managed to sample at various sites along the wetland regions of the river and successfully collect the water hyacinth grasshopper and surveyed for the leafhopper.  Some of the sites we visited included pristine canals within nature reserves along the Paraná River, road side campsites and police stations, city streams and untouched wetlands. All sites had incredible wild life, from insects to birds and mammals. The last site to collect and sample our various species was in Corrientes province, the most northern distribution of the grasshopper in Argentina. On arriving in Corrientes, we were received by Dr Celeste Franceschini, the director of the Laboratorio de Herbivoría y Control Biológico en Humedales (Laboratory of Herbivory and Biological Control in Wetlands) (HeCoB) who assisted with the final collection as well as identification of some of the potential Cornops sp.

Ultimately, the field trip was a success, with over 60 adult Cornops aquaticum, 23 nymphs and 15 egg packets collected from both southern and northern regions and transported back to Makhanda (Grahamstown). This will be more than enough to start a successful population here in South Africa. The successful survey of the leaf hopper Megamelus scutellaris has potentially provided records of parasitoids that may match those found in South African populations. Another potential outcome of the trip is some further studies into the cold tolerances of the new strains of the water hyacinth grasshopper, Cornops aquaticum, as well as improve the success of establishment of the grasshopper in South Africa, through a wider thermal plasticity and adaption to colder environments. The identification of the parasitoid on the water hyacinth leafhopper (Megamelus scutellaris) will also help to combat inefficiency within mass rearing programmes and enable a better understanding of the effect of the parasitoid on efficacy of the control agent once released.

The success of the trip was only made possible through the drive and fantastic energy of the FuEDEI and HeCoB team and a special thanks has to go to Dr Sosa, Dr Franceshini, Tamzin Griffiths, Tomás Righetti, Anna Falthauser, with the latter two, giving up their time to drive the incredible distances we covered in those 5 days. We look forward to taking this collaboration further!” 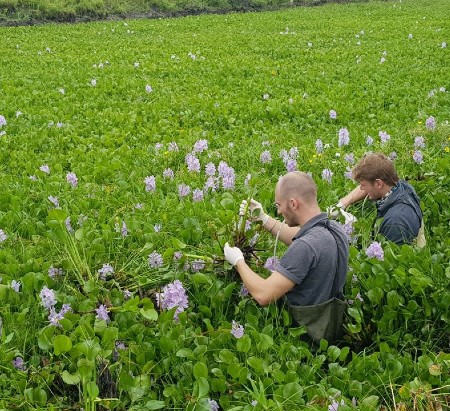 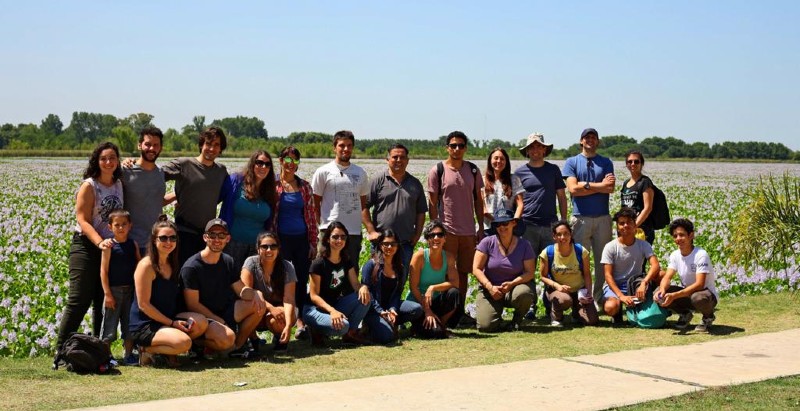