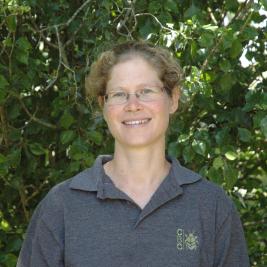 Esther’s job as a Junior Reseracher entails helping with various aspects of research undertaken at the Centre for Biological Control (CBC), with a particular focus on supporting the third year and honours students with their projects. This includes helping with fieldwork, logistics, sourcing material and sending away samples for analysis. She also helps maintain the CBC website, and is helping to develop and advance the database of waterweeds which is housed within the CBC.

Esther is a Rhodes University graduate and completed her BSc, majoring in Zoology and Entomology in 2007 and went on to do her honours at Rhodes in 2008. She then completed a Masters at the University of Cape Town, under the supervision of Professor Les Underhill, who headed up the Animal Demography Unit. Her thesis focused on the prioritisation of bird species of special concern for monitoring and conservation action in protected areas, and was funded by the South African National Parks (SANParks).