On 20 April, the Rhodes University Chinese Section hosted a celebration for International Chinese Day also known as the UN Chinese Language Day. In conversation with Ms Gisela Zipp, one of the Chinese 1 lecturers, she stated that this day was created by the United Nations (UN) as Mandarin is one of the official languages at the UN and it has become one of the fastest growing languages internationally. Zipp added, “the International Chinese Day was mainly created for the international community, mainly foreign students who study Chinese so as to encourage the learning of the Chinese language and culture”.

The celebration for the International Chinese Day was hosted by Chinese postgraduate students Robert Kincaid and Sonia Sajjabi. The event was attended by the Deputy Dean of Humanities and Director of the Confucius Institute, Professor Mwepu, the Head of the Chinese Section and the CIRU Chinese Director, Professor Dexue Liu, all the Chinese lecturers and some Chinese language students. As a welcoming, the Chinese staff sang their own rendition of the 2008 Beijing Olympics song, “Beijing Welcomes You”. The song was a really good opening to the event especially because the guests were encouraged to join in with the singing.

Professor Mwepu made a welcoming speech where he encouraged the students to embrace their Chinese studies as it can garner them many opportunities in teaching, commerce and diplomacy. “This department started not too long ago with just Chinese 1 and later on two more streams were introduced and then an Honours stream was introduced. Even more good news is that before the end of 2022, a Masters in Chinese programme will be introduced”, said Professor Mwepu. Chinese has become a growing course at Rhodes University especially because of the economic and travel opportunities which it brings and so this introduction of the Masters programme will give students an opportunity to learn more Chinese language and culture.

After the introductory speech, there was a 10-minute session to provide some Chinese one student with some tips on how to effectively study for Chinese. One of the advices that stood out from a student was that in order to effectively learn any language in particular, you need to try to think in that particular language even if it is thinking about the small insignificant things such as washing the dishes. Another student also stated that you need to have fun while making mistakes as this is the only way that you will learn while also enjoying the study of a language. Students studying Chinese, also need to consume media such as films, podcasts or music to learn new vocabulary. The main event for the celebration of the International Chinese Day were the games, which are character riddles, charades relay and ring toss games. 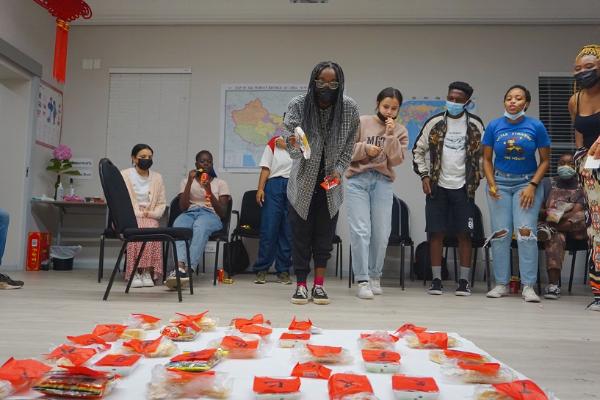 Ms Zou Hongmin, the Chinese 2 teacher, stated that these games were specifically chosen for the students to have fun while also learning some Chinese vocabulary. “There are so many Chinese characters and each of them have their own meaning and so it is so fun to watch the students try to figure out what the word is. The games make it easier for the students to memorise the words”, stated Zou. Ms Zou Hanyang, the Chinese 1 teacher, echoed these sentiments and said, “Students can sometimes find learning boring and so even during class, I try to incorporate some games into the teaching process especially for the first years who are eager to learn”.

Ms Wan Ru, the Chinese 3 teacher stated that certain Chinese characters are difficult to understand and remember and she wants to help her students become more proficient in learning Chinese.

The celebration was a great way for the students to be exposed to more of the Chinese culture while also understanding the relevance for learning Chinese especially with the benefits it brings.