Three years ago, in the unforgiving heat of Beijing’s summertime, I remember taking shelter on the steps of an old building nestled at the heart of Beijing’s prestigious Tsinghua University. Across a stretch of pristinely cut grass, four white pillars framed the entrance to the European styled main auditorium of the campus. The university has become something of a spectacle in Beijing today, rivalling scenic spots such as the Great Wall and the Forbidden City, and getting through the gates of Tsinghua is a daily struggle as tourists in their thousands flock the campus. 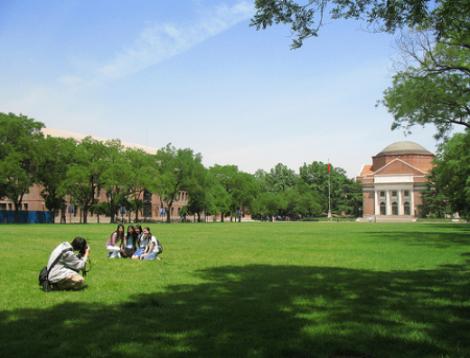 Now, as I bustle through the droves of happy-snapper tourists all jostling for the perfect photo in front of the lawns, I hardly notice the beautiful domed auditorium. This is because it sits just a few metres from my own department – I would hardly have believed this perched on those steps three years ago.

Beijing is one of the most foreign places I know, yet already I dare call it home. The first time I visited the thriving metropolis, I remember marvelling at the eight-lane roads, staring in disbelief at the sheer number of people filling the sidewalks, subways and cramming into busses, and experiencing a feeling of insignificance standing in the shadow of rows upon rows of concrete mountains. Things have changed though, and in the few months that I have been here, I hardly notice the breadth of the roads anymore as I dodge stray taxis and speeding busses in a bid to get to the other side. What began as terror has turned into something of a much needed sixth-sense. Surviving Beijing’s roads requires you not to think, but rather to let yourself join the ebb and flow of the city’s pulse.

I have become one of the millions that crowd the subways and overload the busses. I share the sweat, frustration and fatigue of those around me, as we stand nose-in-armpit, crammed up against each other waiting for the subway doors to close. It is on the subways that I have learnt the most about the people of Beijing. There are the lovers who have chosen to escape the cost and noise of the city, and instead, sleep on each other’s shoulders as the train rambles on. There are the villagers, with bags upon bags stacked up in between their legs, staring wide eyed at the people around them. The teenagers nose-deep in their mobiles with headphones attached to the sides of their heads – plugged in and connected. There is the blind busker, singing songs and shuffling past the ambivalent crowds in the hope of some spare change. The man in the suit, the crying woman, the toddler in the sea of legs – everyone rides the subway.

But it is above ground that one truly experiences Beijing. Sitting in a dirty, dimly lit alley, with pungent smells stinging your nose and dirty water trickling underfoot, you feel the steam of a dumpling basket drift past your face and through this steam you notice a different kind of romance in China. A man walks past, gently swinging a cage under each arm with tiny chirps floating into the night air – he is taking his birds for a walk. Or the young chap nimbly dodging puddles on his rickety bike as his girlfriend rests her cheek on his back, her arms around him. In the air there is the constant sound of laughter, talking and singing.

These are the moments when I realize that I truly like Beijing. Even though the meat I am eating has most likely been cooked in “gutter oil”, the smog of pollution still hangs thick in the air so that I can only see a few blocks down the road, and the sound of traffic constantly fills my ears. I like Beijing.

In my course I am surrounded by people from all over the world – of the thirteen master’s candidates I study with, we represent eleven different nationalities – and together we live the spectacle that is China. We learn from professors that advise the Communist Party of China, we attend press conferences of China’s largest media organizations, and as students of China’s top university we enjoy the privilege of admiration that everyone we encounter bestows upon us.

I came to China with the intention of learning more about this country whose vastly different cultural norms make it difficult to understand, and my journey has barely begun. Now, as I watch, listen and experience all that China has to offer, I envision my path as that of the aspiring global citizen, with a growing appreciation for the diversity and similarity, problems and opportunities found in the cultures around us.

It is true that one can only begin to experience a place if you actually live there, and the Beijing I know now is vastly different from the Beijing I visited two years ago. I am now curious to see what it becomes in another two years.

Daniel Charvat, a Journalism and English student at the time, was part of the first group of students to study Chinese at Rhodes. After studying the subject for two years and having been to China twice, Daniel decided to pursue his future in the direction of China. Daniel is now studying Global Business Journalism at one of China's most prestigious universities, Tsinghua University in Beijing.

The following section is dedicated to Daniel's experience in China over the next two years, not only to serve as inspiration for those students wishing to following the same path but to also shed light on the realities of living and studying in China.