The Amanzi for food phase 2 was launched with effect from12 March 2017 commencing with a strategic planning meeting at Rhodes University, involving key stakeholders drawn from Agricultural education and training institutes and small holder farmers. The meeting led to the development of contextual profiling tools designed to understand the context and needs of small holder farmers with respect to water for food production.

In the same vein these tools were also designed to understand the reciprocal needs of agricultural training institutes, university agriculture faculties and public extension services, with respect to their relevance to the small holder farmer contexts and needs.

The aim of Amanzi for Food phase 2 is to work with interested partners to disseminate knowledge on rainwater harvesting in 8 WRC materials through three course-activated learning networks at sites in three different provinces of South Africa namely Eastern Cape, Mpumalanga and North West. These materials provide well researched working knowledge practices usable by small holder farmers, agricultural training institutes, agricultural educators and extension workers as well as by local economic development facilitators. The focus of these materials is on rainwater harvesting and conservation and its application in household food production, aquaculture, biogas generation, grey water harvesting and use as well as traditional vegetable production. In previous recent years serious drought attributed to climate change and variability has disrputed crop and livestock production in many parts of South Africa resulting in crop losses, food insecurity and malnutrition. This project will contribute to expanding capabilities and knowledge for adapting to these climatic changes.

Initial contextual profiling has been done in all three areas, looking especially for general background information on the area, information on the agricultural training institutes as learning centres, information on smallholder farmers’ struggles and triumphs with water for food. In formation on other key institutes, organisations, and stakeholders in the agricultural learning systems in the area and information on existing linkages between the agricultural training institute, farmers and other local stakeholder farmer organisations was also sought. This initial contextual profiling focused on the current status of rainwater harvesting and conservation knowledge and household food production in these areas. The already existing network in Amathole District is jointly coordinated by a team made up of the ATI and farmer associations.

This initial work has revealed that there is growing interest and need in the Amathole district research site and emerging interest in the two new research sites (Mpumalanga and North West). This interest has particularly been expressed by women farmers and youths and also agricultural training institutes and other stakeholders. 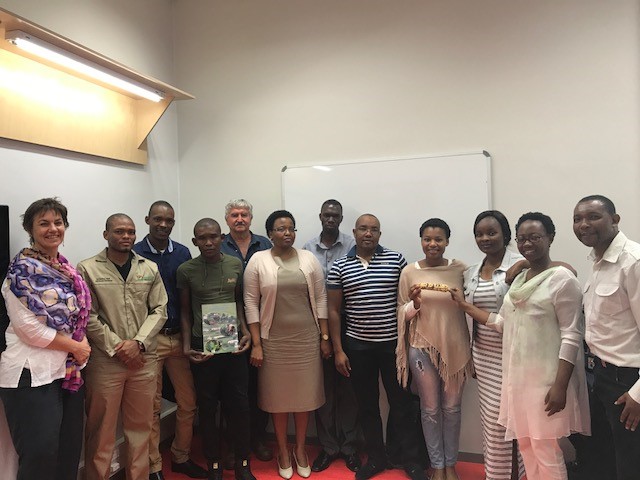 Participants in the Mpumalanga contextual profile (among them are representatives from Rhodes University, University of Mpumalanga, Department of Agriculture and Land Administration, Ukulima Food Sovereignty  and a local sugar company)

Community radio (such as Forte FM in Eastern Cape) and social media are set to play an important communication role in the project.

As a way forward plans have been put in place in enrich the contextual profile further and to facilitate training of trainers courses in the three areas. The learning networks will be cultivated and or supported over a 4-year period with leadership from the grassroots.