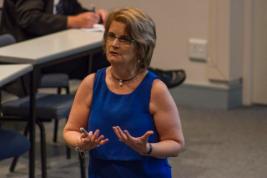 Public Lecture: The Effects of Light on Drugs by Professor Beverley Glass

Speaking on Tuesday evening, 16 September, Distinguished Visiting Professor Beverley Glass explains her research to a public audience consisting of Rhodes staff, students and health professionals in Grahamstown. Her work is particularly in the area of light’s effects on drugs for use in both humans and animals. Professor Glass explains that, while she started her career in pure chemistry, her interests have progressed to applied chemistry involved in ‘solving real problems’. Her research on light’s effects on drugs has very tangible results, not only when it comes to the chemical content of drugs products, but also on how patients perceive the drugs that they consume.

Although Professor Glass now lectures at James Cook University, Australia, she completed her PhD at Rhodes University and had lectured in the Rhodes Pharmacy Faculty for some time before moving to Australia. Consequently, the starting points for her current research were when Lennon Pharmaceuticals in Port Elizabeth (now Aspen Pharmacare) and Fort England Psychiatric Hospital in Grahamstown contacted her about discolouration in drugs. Both of these institutions noted that certain drugs changed colour over time, often despite being kept out of direct sunlight. It was discovered that in both these cases, the light from the fluorescent light bulbs in the store rooms and the factory had been affecting the drugs. It was further discovered that very little research had been done into the effects of different types of light on drugs.

Although the discolouration only affected those parts of the tablets directly exposed to light, consumers familiar with the drugs at their normal colour express fears that the drug may no longer be effective. Professor Glass notes that the amount of each tablet effected may be negligible for the purposes of the effectiveness of the medication, but that the appearance of the tablet may dissuade patients from further taking the medication. Professor Glass illustrated this through an example of patients in Australia who buy their drugs in a week’s worth of daily doses. On Monday, the tablet may appear a light cream to whitish colour, but by Sunday the drug will have turned yellow. Many patients may take this change in colour to indicate that the medication has ‘gone off’ and stop taking their medication towards the end of the week.

Apart from discolouration, Professor Glass explains that exposure to light may even effect the drug’s side effects – even when the exposure happens after the medication has been consumed. This is especially evident in St John’s Wort and Doxycycline. St John’s Wort is plant which may be consumed by animals; it is also taken by people as a natural medicine because it is known to be effective in the treatment of mild to moderate depression. Doxycycline is a prophylactic anti-malarial drug. When humans and animals with either of these drugs in their system are exposed to sunlight, they may develop severe sunburn and even rashes. Understandably, the discomfort caused by these drugs when exposed to sunlight often persuades consumers to seek alternatives. Less painfully but not less visibly, Amiodarone – a drug used to treat arrhythmia – may produce a purplish dark discolouration in the skin of the patient. The embarrassment caused by this discolouration may persuade patients to avoid the drug, or often avoid treatment altogether.

For Professor Glass, it is important that pharmacists who have this knowledge to advise people on taking their medicines. There is no doubt that we need anti-malarial drugs, for example, but many people may avoid taking Doxycycline because of these unwanted side effects which may be avoided by appropriate advice for health professionals including pharmacists. Professor Glass’s work will assist pharmacists develop a more comprehensive view of how light affects medication, especially from the perspective of consumers.

Professor Beverley Glass, a pharmacist, with experience in both community and industrial pharmacy is currently the Chair of Pharmacy at James Cook University, where she is actively involved in both teaching and research. She is the Distinguished Visiting Professor at the Pharmacy Faculty at Rhodes University. Her research interests focus on the pharmaceutical sciences applied to the practice of pharmacy and include the stability of drugs, their storage shelf-life and expiry with special emphasis on the effects of repackaging drugs in Dose Administration Aids. This together with interests in the effects of modifying solid dosage forms for administration to children and those patients unable to swallow tablets or capsules highlights her research focus of expanding the scope of practice for pharmacists and empowering them to ensure their role in the delivery of quality medicines.