Sorry there was an error sending your form.
Giving to RU
Rhodes>Nelson Mandela>About

The Development of a new Hall of Residence

The decision to establish a ninth Hall of Residence was taken following several years of experiencing what the VC termed "an exciting crisis".....a great demand for residence places at Rhodes University. The site chosen for the new Hall was the land adjacent to Stanley Kidd House, which formed part of Kimberley Hall. Four new "state-of-the-art" residences and a new Dining Hall were built, giving rise to the new Hall of Residence which has been named the Nelson Mandela Hall. In the picture, the VC, Dr David Woods, inspects the site of the first building to be erected - then known as S Kidd 9, now named Guy Butler House. 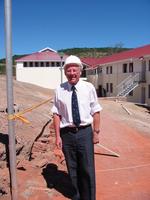