This page has been compiled to help you, the reader, understand the various Coats-of-Arms that we use. Our Coats-of-Arms were approved by the University Heraldry Committee at their meeting on Wednesday, 14 March 1990 and were subsequently approved by the Senate and Council of the University. The accurate and formal heraldic description (blazon) of the arms is presented in italics, and is followed by the derivation of the coats-of-arms accompanies the text.

Please visit this page for information about the University's coats-of-arms.

The Hall and House coats-of-arms were designed by the heraldic expert, Prof. Hugh Smith on behalf of the University's Heraldry Committee and consist of a shield only, as is the custom with the historic residences on campus, and thus do not possess a mantle or wreath.

Prof Hugh Hamilton Smith, M. Comm. (Unisa), Ph.D. (Rhodes), pictured alongside was an ISER Honorary Fellow and was Head of the Business Administration Department from 1961 - 1981. He was the author of several books, two of which covered heraldry and vexillology. he also served on the Heraldry Council from 1975 - 1984 and was involved with the South African Bureau of Heraldry, where our coats-of-arms are registered (Registration Number: H4/3/1/4059). For more information see: 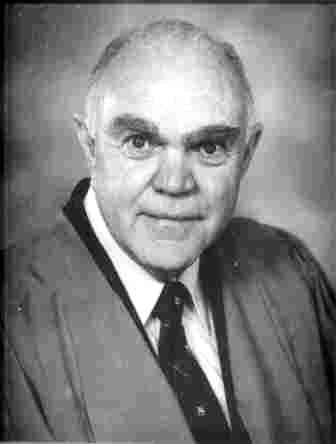 The Hall is deeply indebted to the late Prof Hugh Smith for the work that he did, as well as to the current Hall Warden at that time, Mrs Coral Waite, who had approached Prof Smith and asked him to design our coats-of-arms. We are also indebted to the staff of the South African Bureau of Heraldry, in particular to Mr Marcel van Rossum (Deputy Director), Mr Gavin Schlemmer (Chief Heraldic Artist) and Mrs Melissa McKenzie (the Heraldic Artist), who at the request of Mr Matthew Charlesworth, a previous Warden in the Hall, worked on the formal registration of our Arms. The official certificates - signed on 7 November 2006 by the National Herald, Mr Themba Mabaso and the Chairpersonof the Heraldry Council, Prof Themba Msimang - were presented by Mr Charlesworth to the Senior Students of the Hall and the individual Houses during a Formal Dinner on 22 August 2007 at which the Vice-Chancellor, Hall Committee, and the students of the Hall and their guests were in attendance.

Azure, two keys in saltire Or, between, in chief a mitre Argent, embellished Or, and Azure, and in base, an escallop also Argent. (South African Bureau of Heraldry Certificate Number: 3604)

The mitre on a blue field recalls that Allan Webb, after whom the Hall is named, was Bishop of Grahamstown from 1885 to 1895. The crossed keys, traditionally the heraldic symbol of St Peter, refer to the physical location of the Hall on St Peter's campus of Rhodes University; and also serve to recall that the buildings constituting the Hall were originally the property of the Community of the Resurrection.

The silver scallop shell is taken from the coats-of-arms of Rhodes University to emphasise that the Hall is an integral part of the University. The scallop shell was also the medieval symbol of the pilrim; and by an extension of this concept, may be seen as symbolising the students of the Hall as being pilgrims seeking knowledge.

The armd of the four houses follow a common pattern: the mitre and keys are accommodated on a chief (blazoned as being escartelly dovetailed), with the main field containing a symbol unique to each house. Escartelly means that there is a step (up and down) in the middle of the line of division; dovetailed describes the shape of that step.

Or, a cross paty Azure, having conjoined to each arm a plate fimbriated Azure; on a chief escartelly dovetailed also Azure, two keys in saltire Or, surmounted by a mitre Argent, embellished Or. (South African Bureau of Heraldry Certificate Number: 3603)

A cross paty is one with broad arms. The word plate is a special name for a silver or white roundel; fimbriated means having an outline of the colour named (blue). The blue cross, with the four plates (silver roundels) is taken from the coat of arms of the Archbishop of Canterbury, as depicted on a brass plaque in the entrance of Canterbury House.

Or, a fleur-de-lis-Azure; on a chief escartelly dovetailed also Azure, two keys in saltire Or, surmounted by mitre Argent, embellished Or. (South African Bereau of Heraldry Certificate Number: 3601)

The blue fleur de lis recalls that this heraldic charge appears in the coat of arms of the Diocese of Truro in Cornwall in England.

Or, a diadem consisting of five rays Azure, issuing from a circlet Argent, embellished Azure; on a chief escartelly dovetailed also Azure, two keys in saltire Or, surmounted by a mitre Argent, embellished Or. (South African Bureau of Heraldry Certificate Number: 3602)

A diadem like this appears in the arms of the Diocese of Salisbury in England. It also resembles the heraldic charge called an eastern crown, which is thought suitable for a house located in the Eastern Cape Province (and which once formed part of the Eastern Province of the Cape Colony).

Or, on a hurt a sun in splendour Or, charged with a rose per pale Argent and Gules; on a chief escartelly dovetailed Azure, two keys in saltire Or, surmounted by a mitre Argent, embellished Or. (South African Bureau of Heraldry Certificate Number: 3600)

The gold sun charged with a rose which is half silver and half red is an adaptation of one of the charges appearing in the coats of arms of the Dean and Chapter of Winchester Cathedral in England. This has been selected to represent the House because there was no suitable charge which could have been used for this purpose in the coat of arms of the Diocese of Winchester. The sun has been placed on a hurt (a blue roundel) for no special reason other than to enable the gold sun to appear as a charge on a gold field.

For more information about our Coats-of-Arms, please read our entry in Armoria academica. For those interested in learning more about Heraldry, especially about the language or colours used within heraldry, please visit this website run by Mike Oettle of Port Elizabeth who has been a member of the Heraldry Society of Southern Africa since 1998 and is a Fellow and one of three vice-presidents of what is now called the International Association of Amateur Heralds. Also worth a visit is Arthur Radburn's South African Heraldry Website.

Banners for the Hall and the Residences hang in the Dining Hall and appear below: 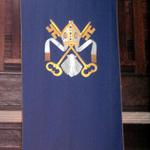 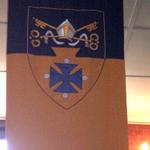 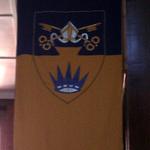 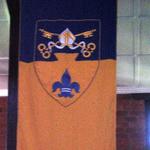 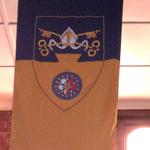 Flags of the Hall and the Residence would appear like the below: 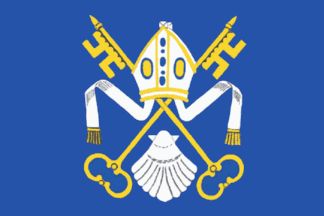 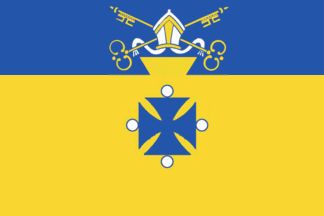 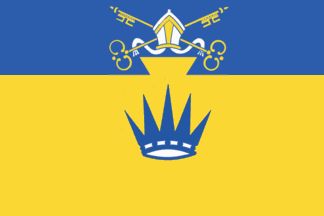 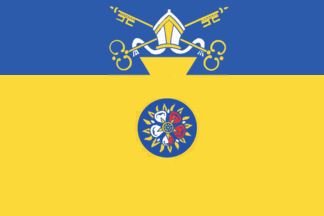