The Chapel of St Mary and all the Angels 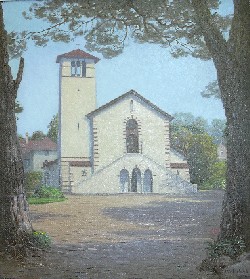 The Chapel of St. Mary and all the Angels, commonly known as the "Rhodes Chapel", is situated within the heart of St Peter's Lawns.

The chapel is used by Christian groups and societies, and for official University services. Past and present students of the University and the former Grahamstown Training College, and anyone else closely connected with the University, may apply to the Registrar for permission to hold a religious service in the chapel.

This oil painting alongside, completed in 1924 when it formed part of the Training College, is one by the well known artist J.E.A Volschenk (1853-1936), the first native born South African landscape painter. The original of this artwork now hangs outside the office of the Vice-Chancellor.

A History of the painting of the Apse

Allan Webb Hall is grateful to the Sisters of the Community of the Resurrection of Our Lord in Grahamstown, and especially to Mother Carol, ninth Mother Superior of the Community, for providing us with this history. 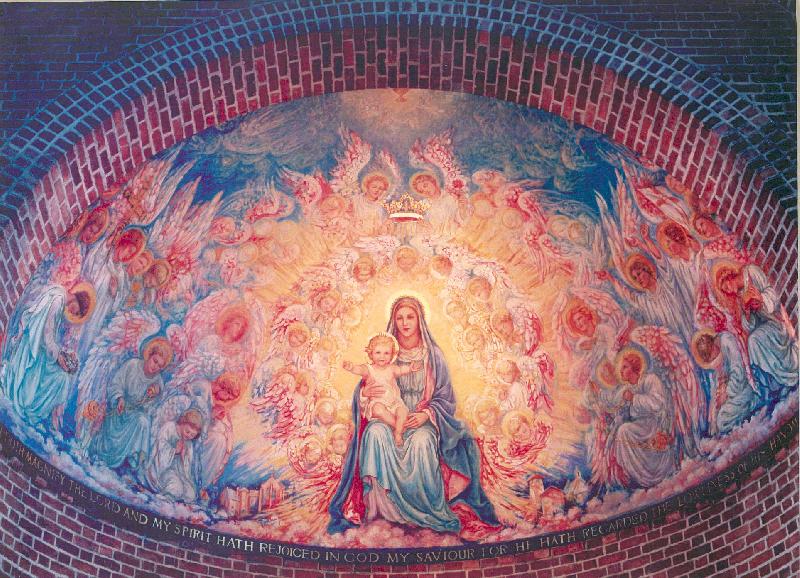 For many years Sister Margaret, who painted the Madonna and Holy Child in the Chapel of the Grahamstown Training College, used to tell groups of students something of how the fresco came into being and what was its significance. Then Sister became too old and frail to do this and she was persuaded at last to write down what she had so often spoken about. The following account was written in rough in a little exercise book, but we feel that many old students of the College and others would like to read it, so it is reproduced just as she wrote it, in her own style; we have not amended it.

Sister Margaret painted the apse between 1924 and 1929 and the fact that it was the result of much prayer and devotion has made the fresco a source of inspiration to many. She lived to be 85 and painted many other frescoes and pictures, but none has had a greater appeal than this.

Chapel of St. Mary and all the Angels - the Apse

If one is to tell the story of the painting of the Apse in St. Mary's it is necessary to go back such a long way - right to the time when old Father Noël, S.S.J.E. came to be our Warden for a short time during an interregnum. Mother Florence was the Superior then and it was a time when work was being done in the Sanctuary of St. Mary’s, which was still unfinished. Father Noël had been an architect in the world and was an artist at heart. He told us that the four windows in the half-dome above the altar – the Apse – were out of place. The light was wrong and they took the eye away from the altar. It was because of his advice that scaffolding was put up, and the windows blocked and the ceiling of the Apse was covered with a smooth white plaster with a fine finish, which was of great service later on.

The next step was the Father Noël said to the Mother “Haven’t you got a Sister who could go up there and paint?” The Mother’s answer was “Yes, we have a Sister trained for art, but she is at St. Monica’s, Queenstown, at present helping in the laundry!” In due course, the Sister (myself) was brought home and introduced to Father Noël. Well I remember that meeting. The Father had a half-sheet of note-paper and began to scribble down ideas as an artist would – Our Lady and the Holy Child in the centre, angels here and there, and two above Our Lady’s head bearing a crown (actually the only bit of the original design still extant), and Saints to fill in the picture; and all the time Father Noël talked and explained.

Very soon I found myself launched forth on designs and all the necessary studies. I had been fortunate enough to go through a course of fresco painting with Mr. Frampton, a well-known fresco painter, whose work was delicate and cultured. (He was cousin to Mr. Reginald Frampton, the sculptor). He was interested to know that I hoped to come out to a Religious Community and spared no pains to put me through the whole course, including the making of the spirit-fresco medium. So when Mother Florence asked me if I could do the painting, I could truthfully say that I knew what to do from beginning to end; but whether I should do it was another matter! “Well,” said Mother cheerfully, “we can always white-wash it over if we do not like it!” And so I began.