As the university community was still excited about the international flavour, including the taste of Chinese cuisine, brought about by the Heritage Day, a new tide of China wave followed the day. With the arrival of the visitors from our partner Jinan University from Guangzhou, China, and the invited guests from home and abroad, the annual China Week was unveiled with an exhibition of Chinese books and information on the decade of development of Confucius Institutes at the lobby of the library of Rhodes University.

To mark the occasion, Jinan University sent a large team from China to participate in both events. Their team consisted of 7 teachers and 6 students of martial arts specialists, who brought here not only the traditional Chinese martial arts show but also the dragon and lion dances.

From the second day of their arrival, the martial artists were busy visiting the local primary and secondary schools, giving demonstrations of lion dances, which became an eye opener for the school children and drew loud cheers from the kids. Besides, the martial artists visited the local martial artists and shared and exchanged their professional experiences. It is the first time that the different schools of local marital artists had a close contact with Chinese martial artists to share their experiences. In the evening of Friday, 26th of September, the visiting Chinese martial artists and the local ones jointly gave a free show to Grahamstown local community at the Box Theatre of Rhodes University. The audience filled the place and enjoyed a spectacular performance that they had ever had a chance to view on spot. This show pushed the week's activity to the peak.

Apart from these entertaining events, academic lectures and seminars were also held on an extensive range of topics across a number of disciplines and fields of research. Audiences include academics and students as well as the seniors from U3A. Renowned South African philosopher Prof Metz from the University of Johannesburg was also invited to give a talk on his recent research on the comparative studies of South African and Chinese philosophy. Falk Hartig, a researcher from Germany on the phenomenon of Confucius Institutes, was also invited to deliver a talk as a special commemoration of the 10th anniversary of Confucius Institutes.

The activities continued on the 27th of September, the first Confucius Institute Day, at the Chinese Cultural Centre on 36 Somerset Street, when the local Upstarters joined the day's open house celebration by having fun in learning some Chinese, calligraphy and Chinese painting and even some Chinese gongfu. The day started with another show of dragon and lion dances that amused the visitors to the open house activities. Some local visitors also consulted the traditional Chinese medical doctor for therapy and advice at the session when they drank Chinese tea and discussed the issue of keeping healthy with the traditional Chinese medicinal methods. 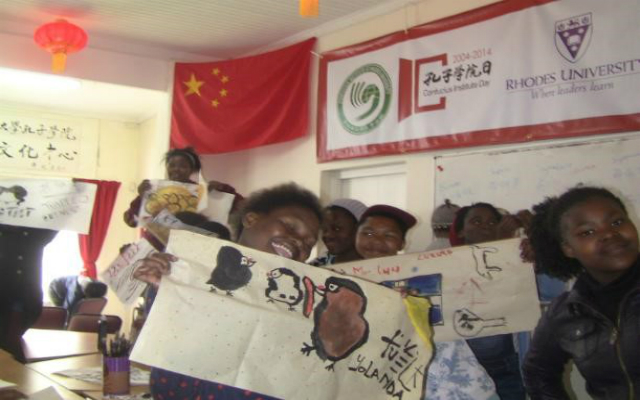 2014 China Week and the first Confucius Institute Day celebration ended with a satisfactory touch of food and souvenirs as well as positive comments from the open house participants. The week long celebration became an ever successful one accompanied by the dynamic lion and dragon dances that lasted for about a week at this small town with a historic significance.