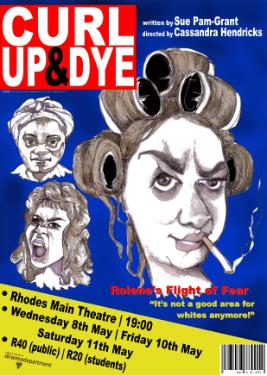 Curl Up & Dye is set in Hillbrow, Johannesburg in 1989. It was a volatile, dangerous and exciting time for South Africans and the world. 1989 would mark the last year of captivity of future president Nelson Mandela.

The end of Apartheid was palpable but many feared that it would not end peacefully.

Curl Up & Dye captures hysterical white fear of Rolene, the main hairdresser in the salon and Mrs Dubois, a long suffering patron of the hair salon. Miriam, the black cleaner who ultimately runs the salon, gets paid a pittance and is subjected to humiliating advertising campaigns. Charmaine, a prostitute and Rolene’s neighbour uses the salon as a safe house to momentarily escape from her violent, drug-fuelled existence on the streets of Hillbrow. Dudu, a  well-to-do nurse comes into the salon hoping to get her hair treated only to be confronted by a slew of social political issues.

Curl Up & Dye performs at The Rhodes Main Theatre at 7pm on the nights Wednesday 8th, Friday 10th and Saturday 11th May.  Tickets are R40 for Public and R20 for Students.  Block bookings can be organised with Theatre Administrator Robert Haxton who can be emailed on r.haxton@ru.ac.za. 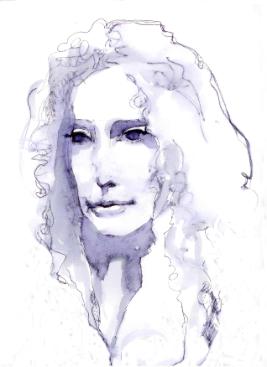 ‌Rhodes University Drama Department is proud to present “Drifting”, a tribute show to the acclaimed South African playwright, Reza de Wet, to be performed at the Rhodes Theatre during Rhodes Graduation on the 4th, 6th,and 9th April 2013 at 7:00pm.

“Reza has such an incredible legacy, both within the department, nationally, and internationally,” says department HOD Andrew Buckland, “that we wanted to find a vehicle to celebrate her, and mark her passing, appropriately. But how does one do that? We considered various options – doing an entire work, recreating various scenes…but that led us down the track of either trying to find the definitive Reza show, or ending up with a variety concert. Instead, we have decided to do what Rhodes Drama does best – a visual and physical response to her oeuvre, and the creation of an original response, or reaction to her as a provocation.”

The result is a mixed-media, multicultural, and many-faceted response to her work. An eclectic mix of senior postgraduate students and professional performers has birthed “Drifting” under the curatorship of Rob Murray, Andrew Buckland, and new design head Illka Louw.

“There is a new movement within the department,” says Buckland, “with new lecturers and a fresh energy towards making work. All of this plugs into the show that will showcase our strengths and emphasise our belief in collaboration and a shared creativity.”

The resultant work is a number of image-driven scenes inspired by various de Wet texts such as “Drif”, “Diepe Grond”, “Mirakel”, and texts for the First Physical Theatre Company such as “Dialogue” and “Unspeakable Story”.

“We’re pushing the theatricality of the scenes,” says Illka Louw, “in order to capture the essence of Reza in image, sound, mood, and atmosphere. In this, we have taken certain theatrical and poetic licences in the weaving together of disparate elements and various manifestations of Reza and women in general and the creation of a magical realism that we believe she would approve of.”

“There will be certain areas that will irritate the purists,” adds in Murray, “in that we have filtered Reza’s texts through the physical imagination of the core cast made up of department staff and senior postgraduates. But what they’ve all come up with will hopefully lead to a curiosity and intrigue to revisit her texts, or act as an introduction to Reza, and do justice to the complex and amazing artist and woman that she was.”

All monies made off ticket sales for “Drifting” will go straight to furthering The Reza De Wet Post Graduate Bursary for Drama Students.

“Drifting” performs on the 4th and 6th April at 19h00 and a Student Special Performance again on 9th April at 19h00.  The show is PG rated for language and disturbing scenes.

Tickets can be booked at either the Theatre Cafe or in Room 107 in the Drama Department.