Sorry there was an error sending your form.
Giving to RU
Rhodes>Drama>Productions>Productions 2017

The Drama department in collaboration with St Andrew’s College presents:

Pianist Joanna Wicherek in collaboration with choreographer Athina Vahla presents the solo piano performance of Frederic Rzewski's De Profundis for speaking pianist (1994). This is the first iteration of an adaptation of Rzewski's composition based on selected texts from Oscar Wilde's famous letter De Profundis written in 1897 during his imprisonment in Reading Gaol. In this interdisciplinary performance music, text and movement collide within measured time: the pianist reaches beyond the expressionistic style of the original composition into a more intimate and embodied role.

There will be a post-show discussion on Saturday 1st of April. 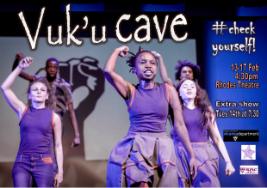 The annual orientation theatre event, in 2017 titled Vuk’ucave, is, like its predecessors, Abantu Stand! and The Amazing Other Show, designed to challenge new students’ preconceptions, make them aware of some of the risks and choices they will face, and provide them with enough information to make their own appropriate decisions. The work is driven by a transformative agenda, and seeks to deal authentically with the real lived experiences of students at this university.

The material excavated by the cast during the creation process includes a wide range of sensitive but vitally important topics, including racism, sexism, homophobia, xenophobia, protest action, and substance abuse amongst others. The show is work-shopped by a cast of student performers under the leadership of senior masters drama students, and supervised by the staff.

The provocative style of presentation, includes the opportunity to engage critically with the actors during the show, to test opinions and views – and to hear those of others.

Using a wide range of theatrical strategies including humour, spectacle, intimacy and the immeasurable potential offered by the presence and immediacy of the players in performance, deeply serious issues are examined with intelligence, stereotypes are challenged, and identities and values explored.

This was the endorsement offered by the Dean of Students:

The show is refreshingly different, and it works because young people are acting in front of young people; nobody ‘preaches’, it is clever and witty, funny and wryly sad at times, and because it takes the risk of being highly provocative about some of the unmentionable topics that are so vitally important in young people’s lives: sex, fitting in, trying out new things etc.