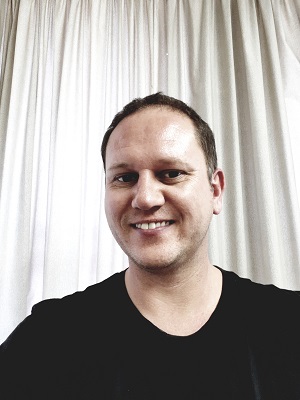 Alan Parker is a Physical Performance Lecturer at the Rhodes Drama department where he teaches courses in Movement Studies, Somatics, Physical Theatre, Choreography and Physical Performance. He holds a Masters degree in Drama, specialising in choreography, from Rhodes University and is currently engaged in doctoral studies through the University of Cape Town in Live Art, Interdisciplinary and Public Art.

In 2015, as part of his doctoral research, Alan began creating a trilogy of solo performances as a means to explore the archive of dance in South Africa. The first of these, ‘Detritus for one’, received a Standard Bank Ovation award at the National Arts Festival 2015. The second in the trilogy, ‘Sacre for one’, received a Silver Standard Bank Ovation Award in 2016. The third work, ‘Ghostdance for one’, was co-commissioned by the Institute for Creative Arts (ICA) for the 2017 Live Art Festival in Cape Town as well as the 2017 National Arts Festival.

In 2016 Alan was an ICA Live Art Fellow at the University of Cape Town and, in 2017, served as an ICA Writing Fellow. His book chapter, ‘Effigy in the archive: Ritualising performance and the dead in contemporary South African Live Art Practice’, appears in the ICA’s Acts of Transgression: Contemporary Live Art in South Africa, 2019.