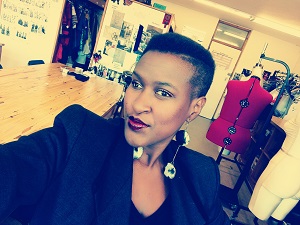 Shiba graduated with a diploma in Fashion Design from CPUT in 2006. She took her first step into the fashion industry by spending two years as part of Lunatique CC's design team. She also spent a year as the Head Designer for a young label called Yuki, which supplied a number of boutiques in Cape Town and Johannesburg.The business eventually supplied YDE Franchise group.

Shiba has always had a love for costume designing and styling. She followed her heart by enrolling for a one year Internship Program with the Artscape wardrobe department. Since completing her internship she has been working as an independent designer, wardrobe specialist and stylist for various clients.

Some of her career highlights include working with designers such as Dicky Longhurst (Artscape) and Craig Louw (Jazzart). She has also worked with directors like Itumeleng Wa-Lehulere (Baxter), Neo Muyanga (Flowers of Shembe/Black Sunshine), Cartherine Henegan (Afro Galactic dream factory) and Ina Louw (Jazzart)

Since the inception of SHIBA DESIGN enterprise, Shiba has been applying her 10 years of industry experience, working as the director, responsible for mapping out the artistic and creative direction of the company.Currently working as heard of wardrobe in Rhodes University