Ulwazi is an initiative that was born out of a need for the Department of Information Systems to engage with the community at large.  The aim of  Ulwazi is to make a positive impact in the Grahamstown community in conjunction with students who have an active interest in making a difference. A variety of projects that have the community at heart will be undertaken and seen through to completion.

There is no questioning that technology has taken the world by storm. We would like to see an environment that vigorously attempts to keep afloat in the tide of technology. The Ulwazi initiative aims to realise ways in which to assist the community from a technological perspective. Ultimately Ulwazi Outreach would like to yield a new breed of Grahamstown community which is empowered through the transferal of ICT skills.

Project: Makana Municipality Library
Here we worked with the local librarians in a collaborative effort to assist them with their library cataloguing system as well as help students from local schools with skills related to general computer literacy and information-seeking. We hope to that through this outreach programme we will raise awareness of the Information Systems career path and the vast opportunities that exist in the field.

Project: NV Cewu Public Primary School
In 2013 Ulwazi Outreach partnered with NV Cewu Public Primary School, a primary school situated in Joza. Ulwazi Outreach partnered with Cewu mainly to train teachers and students on basic computer skills. Every week Monday to Thursday, 2 sessions each day the students and teachers were introduced to computer concepts and were encouraged to use the computers. The school initially started with 20 portable laptops (that had been donated by Vodacom Millioneers and 5 working desktop computers from the Makana District Department of Education). Through Rhodes University, the IS department donated 20 computers and a photo copy machine. A year end function was hosted at the school to congratulate the students and their teachers for their hard work; the day was filled with performances from the students and a speech from the school headmaster (Mr Wanele Ndyolashe) and the Information Systems Head of Department (Professor Greg Foster). The Ulwazi Outreach initiative is made up of IS students who volunteer their time, without them the initiative would not be successful hence the department would like to extend its appreciation and gratitude to those Rhodes students who partook in Ulwazi in the year 2013 as well as the CoE office for its resources 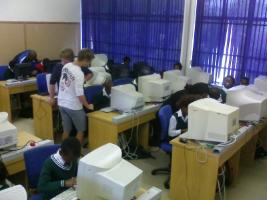