Sorry there was an error sending your form.
Giving to RU
Jan 19, '18

Postdocs gather to end International Week on a high note

A continent in crisis: Rhodes University academics discuss how the Ukraine-Russia conflict will impact Africa

How can internationalisation regain momentum in South Africa?

South Africa’s universities are adopting an international lens: why it matters

Xolani Mhlanga: from Nelspruit to California in the name of Geology

‌Beginning from the Botanical Gardens, Lucas Avenue, moving through High street to the City Hall, and ending at the Great Field

Rhodes was the first University to host an International Parade and we celebrated our fifth one this year. The intention was to create a CELEBRATORY, positive space for people from different backgrounds, cultures, countries and lifestyles to come together.On the day we celebrated the DIVERSITY found in our community!

The Paraders were dressed to reflect the country they were representing with costumes, colours and flags. 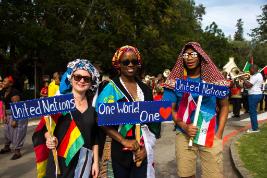 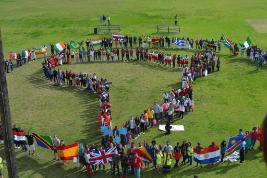 The documentary is a personal odyssey that interrogates the meaning of freedom, reconciliation and forgiveness in South Africa through an imaginary letter to Nelson Mandela and conversations with some of the renowned politicians, public intellectuals and artists from all quarters of the world.

The film was screening at a revitalized political atmosphere in South Africa, where there’s a rise of students’ movement across the country, from UCT: Rhodes Must Fall to Black Students Movement at Rhodes University.

Mr. Manosa Nthunya, one of the speakers on the panel offered a fervent response to the film, linking it with the current political discourse about transformation in contemporary South Africa, ranging from the Rhodes name change to the removal of statues.

In his response Nthunya proposed for an ironic way of engaging with the past arguing that by doing so, one allows him/herself for a deeper reflection on the complexities that inform every life.

“I was therefore deeply troubled that when pushed to the corner, the senate and council at UCT agreed that the statue be removed,” said Nthunywa, “I thought we had crisis in our democracy”

He continued to argue that what he had in fact presumed would have been a responsible response the university could have sent out is that “all students should learn, relentlessly learn how to live with irony”

Nelson Mandela: the myth and me, an emotionally gripping flim, explores and leaves a behind a plethora of dilemmas with no clear or definite answers that confirm what the audience would want to think.

Similar to Matabane, Nthunya argued that an appreciation of irony always makes a call for deeper thinking.

In each segment of the three themes: freedom, reconciliation and forgiveness, the director leaves many dilemmas for the audience to think about, but one of the most striking one lies along the forgiveness theme.

“When you have to live with the realities of peace on a day-to-day basis, and you see the level of poverty, you ask: is it worth it? Is the peace worth it? Especially in a society where those who were responsible for the atrocities do not even acknowledge that is it the consequence of their own actions?” explained Matabane.

Describing how he feels about the character that is being explored in the film, Mr. Matabane said he thinks of Mandela as a mirror offering people an opportunity to reflect on human nature.

“I think Madiba offers us an opportunity to reflect on the possibility of human nature, and that indeed we can become better human beings even at a cost of ourselves”

March rejecting xenophobia and all other forms of intolerances and chauvinistic behaviours.

Describing the two months he spent in Grahamstown as part of the Mellon Writer in Residence fellowship at Rhodes University as having been amongthe richest, most energizing and rewarding of his adult life, writer, poet and editor Denis Hirson brought an international flavour to his contributions at Rhodes.

Drawing on an incorporating the expertise of international scholars formed a central aspect of Hirson’s activities during his time at Rhodes, and is reflected in the diversity of the content he exposed his students and audience members to between August and July 2014.

Hirson has been a regular visitor to Grahamstown since leaving South Africa for France at the age of 22 in 1973 but hadn’t experienced this level of engagement with the larger community on any of his previous trips. Despite having been offered the possibility of doing writing residences in several places outside of South Africa, this was the first Hirson accepted, somewhat sceptical that any writing would come of it. Hirson wrote, taught, was involved in several public events including the launches of two books, and participated in various ways in the literary life of Grahamstown, all with a distinctly international flavour.

During his time at Rhodes Hirson participated in various ways in the Masters Programme in Creative Writing under the aegis of the Institute for the Study of English in Africa (ISEA), presenting two seminars. The first of these was on the different stages of the relationship between a writer and his or her work, beginning with intimate words to be shared with friends, ending with the impersonal contract that can be drawn up with both an unknown reader and a publisher.  This seminar was illustrated with prose by various writers including Kafka, Jean Giono, Carson McCullers and Sylvia Plath, and poetry taken from the recently published anthology Hirson edited, titled In the Heat of Shadows, South African Poetry 1996-2013, including work by Antjie Krog, Karen Press, Mxolisi Nyezwa, Gert Vlok Nel, Ingrid de Kok and Rustum Kozain.

In the second seminar Hirson discussed the relationship between poetry and rites of passage, notably those concerning birth, puberty, marriage and death, asking, among other things, why it was that a poet should be called upon to find words for these occasions. Here Hirson drew on texts by Antjie Krog, Adrian Mitchell, Bob Dylan, Khalil Gibran, Vonani Bila and Diana Der-Hovanessian and students were asked to write poems from both personal and impersonal perspectives on birth, love and death.

Hirson participated in two sessions during which students of the MA in Creative Writing course prepared and then gave feedback on the writing workshops and public readings that they themselves had been asked to run in an institution of their choice, out in the community of Grahamstown or one of its townships.

Together with Robert Berold, coordinator of the MA in Creative Writing course, Hirson prepared and participated in a bilingual reading and subsequent discussion of Martiniquan Aimé Césaire’s Cahier pour un retour au pays natal/ Notebook for a Return to my Native Land, an event which gathered lecturers and students of the Politics, English and French departments as well as the Creative Writing programme.

Hirson also gave a lecture on contemporary South African poetry to first year English students, along with a brief reading, and initiated and participated in an evening of tribute to Nadine Gordimer, along with Dr. Deborah Seddon, Sue Marais, Professor Emeritus Malvern van Wyk Smith and Robert Berold.

Hirson has taught in one way or another since he started working in Johannesburg in the 1970s, but he noted a “singular aspect to the work with the Rhodes students, particularly those of them involved in writing”. “They themselves, like their teachers, were in contact with the energies of the local environment, plugged in, as it were. For me, this added to the density and intensity of what happened during the seminars and readings. When we discussed Césaire, for example, there were immediate links made between his affirmation of identity and ability to speak in poetry of the concrete details of poverty, and similar challenges for South African writers,” Hirson said. Following the seminar on rites of passage, where participants raised questions of birth, love and death, several of the poems the students wrote involved a connection with the turbulence, and pleasures, of the world immediately around them.

Hirson believes this might explain the impression that his teaching activities gave him unusual, accelerated access to what was happening in his local environment and indirectly fuelled his own impulse to write, culminating in more than 30 typed pages of poems and prose which he has taken back to France. Hirson’s residency coincided with the National Arts Festival, which increased his exposure to “what was happening in the country, not least of all since in many cases the accent of these events was placed on social relevance”.

Hirson also participated in a colloquium on the teaching of creative writing, the first of its kind ever to be held in South Africa. Among the participants were several people whom Hirson had already been involved with during his stay, including several teachers on the MA in Creative Writing course, Vonani Bila, Stacy Hardy, Anton Krueger, Kgebetli Moele, and Lesego Rampolokeng. Other contributors, such as Noy Holland from the University of Massachusetts, Jean Mcneil from the University of East Anglia, and Paul Munden of the UK National Association of Writers in Education as well as the East Rand poet and community teacher Angifi Dladla, all stretched the colloquium in striking ways beyond the universities and beyond South Africa. “The combined effect of their contribution to the colloquium only confirmed the degree to which my stay had been enriched by the intellectual micro-climate surrounding this course,” Hirson said.

Where leaders learn together

Engaging with the world