The Sol Plaatje Institute for media leadership introduces the new Primedia and the Open Society Initiative for Southern Africa (OSISA) scholars for 2014: 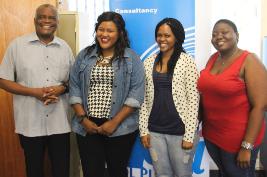 The Primedia scholarship encourages students to focus on digital media advancements during the course. This year Primedia chose these four PDMM students:

Lengwadishang ‘Lee’ Ramphele
Lee received her BA (media and communications) at the University of the Western Cape in 2004. In 2011 she started working for a community radio station, Phalaborwa FM as the program manager. “Being awarded a scholarship to study the PDMM is a dream come true. I have always had the urge to study further but never got the opportunity…My biggest aspiration is to get a job in one of Primedia’s radio stations,” Ramphele says.

Neo Khoza
Radio broadcaster at Rhodes Music Radio (RMR), Neo, has a BA in journalism and media studies from Rhodes University.  She proclaims that she wants to become a developmental journalist and use radio as a tool to tell the stories of people who need it. She also wants to be a media leader who, in her words, “shape current media content and hold media accountable to those ideals that make it a vehicle of social change and upliftment.”

Cape Townian, Qama, completed her undergraduate degree last year at the University of Cape Town, graduating with a BA in film, television, media and writing.  She is interested in television production and programming mainly and wants to use the PDMM course to prepare her for the media world.  She wants to tackle pressing issues in the country through television and explains, “I aspire to generate unique local television content that unapologetically addresses the complexities of race and sexuality in our country, as well as the notion of body politics.”

Sithandwa finds herself close to home as she comes from Port Elizabeth. This B.Journ graduate specialised in radio and according to her, “radio production is my first love because it allows me to create and to escape into other worlds.” She wants the PDMM course to help her understand the business side of media organisations. She wants to empower the youth of today and help them connect, breaking down barriers. Sithandwa emphasises the importance of education and helps children from Nathaniel Nyaluza High School with their school work and life skills.

The OSISA scholarship for SADC women leaders focuses on the empowerment of women. Meet the three scholarship winners:

In 2009 Baboki graduated at the University of Botswana with a degree in media studies.  She then worked for a daily newspaper, Mmegi to start off her career in journalism.  She is also part of the World Association of Newspapers and Publishers’ empowerment drive which focuses on women in the media in Southern Africa. It is here that her interest in media management became promonent and she decided to do PDMM. She was a suitable candidate for OSISA with her focus on women in the media. “I hope to learn a lot from PDMM on media convergence and divergence…” she says.

“Journalism is an exciting profession, more often not too predictable,” Chisomo summarises her interest in media. She lives in Malawi and graduated with a BA in journalism in 2003 at the Polytechnic. After which she worked at Nation Publications Limited, one of Malawi’s leading media organisations. She then became sub-editor at the sports desk. This position saw her making history as the first woman to work for the sports desk of the newspaper. She also obtained a Post-graduate diploma in Media for Communication in Development, from the University of Malawi. She found herself in broadcasting after moving to Television Malawi. She became a member of the editors group, Women’s Edition.  She finds herself now in the chief editor position and wants to build on her managerial and leadership skills within the media industry, thus making PDMM the perfect choice. Her strong background as a woman making history landed her the OSISA scholarship for SADC women leaders.

As Head of Production and Operations of TV2 at Zambia National Broadcasting Corporation (ZNBC) Inutu supervises a team of television producers, graphic artists, editors and cameramen. With a journalism degree from Zambia and her M.A. in international journalism at City University in London, she is well equipped for the journalism world. However, this does not give her enough for her role as a manager. "So far my media training has focused exclusively on journalism, but I need to develop knowledge and skills in other areas of management," Inutu says. The PDMM course will help Inutu and the others understand the role of a manager in the media environment.

For more information about next year’s PDMM course and scholarships that are available email l.snam@ru.ac.za