Makhanda -- What was meant to be a book launch for the late Matthew Buckland turned into a touching wake about a brilliant young digital entrepreneur whose life touched many and unfortunately came to an end too soon.

Hosted at the Amazwi South African Museum of Literature in Buckland’s hometown of Makhanda, formerly Grahamstown, academics, students, family and friends gathered to celebrate the launch of ‘So You Want To Build A Startup?’, a book Buckland wrote detailing his adventures as a digital media entrepreneur and how he founded and sold a multimillion-dollar start-up business.

Buckland studied towards a journalism degree at Rhodes University before working at reputable media organisations such as Beeb (BBC’s commercial web division at the time), Carte Blanche and even managing the online division of the Mail & Guardian.

In 2010 he founded media agency Creative Burn and publishing company Burn Media Group, which he later sold to listed advertising company M&C Saatchi before venturing out into a new business journey – an experience he details in his book. 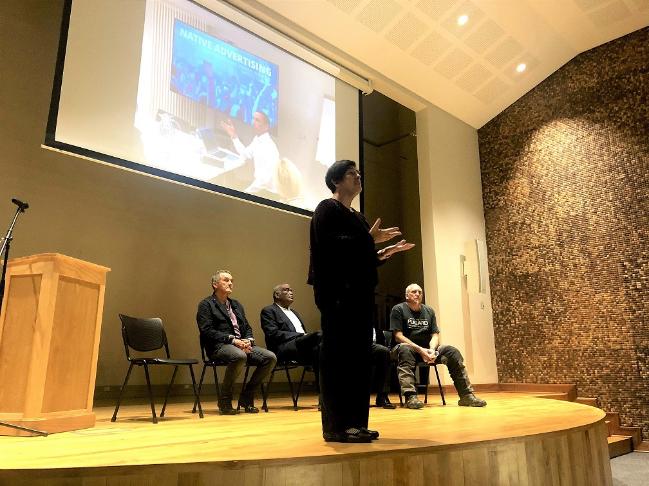 Mdlongwa started off the proceedings speaking of Buckland’s inspiring role as an ethical and professional journalist noted for his innovative entrepreneurial spirit and his work as a pioneer in the ever-changing digital media landscape. Mdlongwa highlighted that his book represented what it truly means to make a positive difference in the journalism profession, a book that many budding entrepreneurs can and will benefit from.

The way I remember Matt and will always do is that he was simply an ordinary decent human being you could trust. A human being who was disarmingly humble despite his lofty achievements; a human being whose infectious and ever-present smile made you most welcome even in times of disagreements; and a human being who remained true and passionate to the cause of professional and ethical journalism right up to his last breath.

At the Sol Plaatje Institute for Media Leadership (SPI), where I have been director for more than 15 years, he often came to teach in a series of media management short courses that we host, often doing so without asking to be paid.

He was also a familiar and towering figure at almost every summit meeting of the Africa Media Leadership Conference series, which my Institute held in a different African country each year from 2002 to 2010.

He participated and contributed fully at these media summits, which sought to find practical solutions to challenges that face media organizations and journalism in today’s rapidly changing and turbulent environment. He never seemed concerned whether he was attending these conferences as a delegate or a key-note speaker. His was to share his wide experiences and knowledge with those attending and to gain different perspectives from others on how to craft a viable and sustainable future for media firms and journalism in Africa. He had a warm heart for Africa’s economic development, especially of its journalism and media institutions.

Leaving the academy for the real-world of work, the story of his entrepreneurial spirit in the digital media, where he was a pioneer of his generation in this country, has already been fully chronicled. I particularly was touched by his passion and love for experimentation with what business model works or does not work in the digital media landscape.

His book that we launch today partly captures some of his novel ideas, work experiences and knowledge of a media industry that is today facing an existential economic and financial crisis for a range of reasons I don’t have time to go into here.

However, his book represents an indelible step by one human being to make a positive difference to his profession and what Neil Armstrong, on being the first person to land on the moon aboard Apollo 11 on 20 July 1969, called ‘one giant leap for humankind’.

Matt’s book will inspire, educate and inform many others who aspire to be entrepreneurs par excellence in this and future generations on the right mind-sets they need to have and on the critical steps and, at times, mis-steps on the journey to becoming your own innovative and successful business boss.

For this and for all the good and decent things that Matt did and represented here on our Beautiful Earth and now leaves behind for posterity, I simply say to his departed spirit: Hambakahle, Salaam, Shalom, Peace. I thank you.

Chief reporter at Daily Dispatch and friend to Buckland, Mike Loewe who recited his punchy review at the launch said: “I think your story ... is from the future.” A book which he considers to be full of information for the millennials written by a man he called ‘front-runner’ and ‘reconnaissance warrior’, who scribed his life lessons and tales … on paper.

“Dear millenials, we the bhalis will be gone sooner than you expect. There’s much to be done to save humanity on this planet. We desperately need a new economic and social order, which is fair, democratic, just, creative and kind.” Loewe further urged millennials to take useful teachings from this insightful book and spread them throughout humanity, emphasising that “your journey is right here, in your hands, in this book.”

Skae’s shared a text message exchange between Buckland and himself and described his journey of working with a man in assisting the Rhodes Business School despite his responsibilities in the corporate world. He related Buckland’s enthusiasm for the ‘Silicon Cape’ and how innovative he continued to be.

The most touching part of the evening was the moving speech given by his father Andrew, who spoke of what a privilege it was to be Matthew’s father. Addressing the audience from a more personal stance, Andrew said that the greatest gift Matthew gave him was watching him become a father of two girls and taking Andrew’s parenting skills way beyond anything Matthew had experienced from him.

After listing qualities that stood out most to him, he stated: “In the end, it was his unfathomable courage that we witnessed.”

Buckland completed the great European mountain-bike race, Trancealps in mid-2018 months before he was diagnosed with stage-four oesophageal cancer. 10 October 2019, the day of the book launch, ironically fell on the first anniversary of his initial diagnosis, Andrew remarked.

Buckland’s resilience shows in his memoir when he speaks about his feelings after his diagnosis. “It is critical for me to remember in which direction ‘success’ lies. In short, I need to engage the same drive I had in creating my business to win this toughest of fights.”