Haidula, who is the Head of Bureau and Senior Journalist at The Namibian, won in two categories at the Editors’ Forum of Namibia journalism awards – the Community Journalism Awards and the Health and Social Welfare Journalism Award.

These awards celebrate journalism excellence across all media platforms in Namibia.

Below, she answers some questions about her work.

Q: While working on the stories for both the award-winning articles, did you envisage that they would win these or any other awards?

A: Honestly, no. For both pieces, I just wanted to tell the story, but tell it so well that people could relate to their societies. My concept is: News from the people to the people. In the past, I have not entered my work for awards as I never deemed it necessary. After the wins, I am more open to the idea.

Q: Do the stories you cover impact you on a personal or emotional level? If so, how?

A: Yes, they do. On top of my own personal demons, I carry second trauma from events that I cover. Sometimes they happen one after the other, which becomes overwhelming for an individual. This is especially because I see the need for more in‐depth reporting on human rights issues and health threats, which cover most of my angles in stories. At times, these stories remind one of the lack of humanity and empathy amongst us. A broken community. Shattered and destroyed by their own.

I have had the chance to cover stories like baby dumping, mental health, concealment of birth, as well as women health issues and witnessed first-hand some of the challenges that our health system is facing, but also the great care offered by our physicians and nurses.

Q: What are the best qualities of your writing style?

A: I have a love for creative non-fiction. I focus on solutions-based, narrative journalism or stories that showcase how people are solving – or are attempting to solve problems. I am a little different from most journalists in that way. My favourite part of the job is putting a narrative feature together. However, the difficult part is writing a story in a way that I take the reader to the story and have them feel they are part of the experience, all while paying attention. The article can take over a week to produce which at times gets me in trouble because I work for a daily and I am supposed to produce a story daily. Eventually, the hard work pays off and I have seen how these stories can change lives.

Q: What is your highlight or best moment working as a journalist?

A: I could write an entire book but beyond the fact-checking, interviews, proof-reads and contacts book, the best moment was when I helped reunite a mother and her children whom she had abandoned because of poverty. After the story broke, Namibians from all walks of life chipped in to save the day. They built a proper structure for the children and provided food, utensils and all the other basics. The school-going children also received school uniforms. The regional council helped track down their mother and asked her to come back home and the gender ministry provided counselling services to the woman. 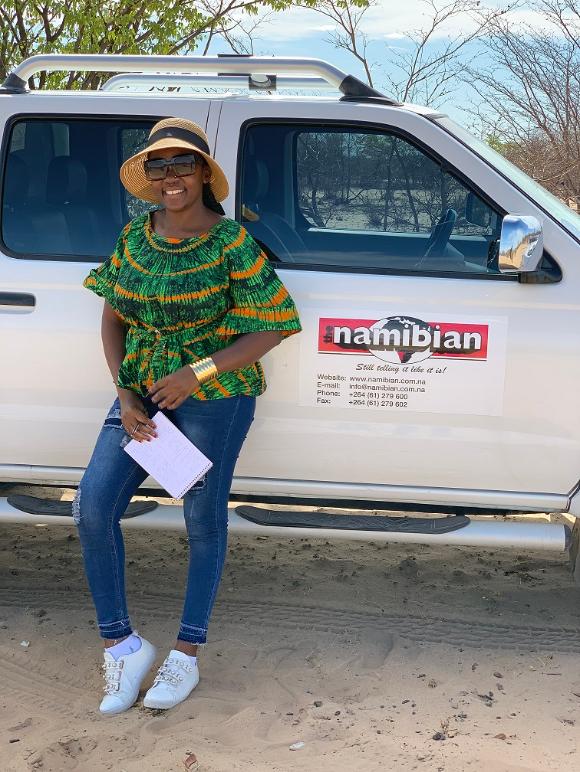 Q: How has the SPI’s Postgraduate Diploma in Media Management – an honours degree-level qualification in media management and the only qualification in this field in Africa and the developing world --  impacted your career thus far?

A: Since completion of my Post Graduate Diploma in Media Management at Rhodes University’s SPI, I have been appointed as Head of Bureau at The Namibian’s Oshakati Office. While the position is exciting, it is quite a demanding one and it is allowing me to implement what I learned at SPI in 2017.

It was also while at Rhodes University that I got a chance to do an internship at Bhekisisa (the Mail and Guardian’s health reporting unit). I worked with the Bhekisisa team on compiling a sizamap that can help citizens’ access safe abortions. This has helped me see the need for more in‐depth reporting on human rights issues and health threats in Namibia, creating a market for investigated community stories. I will forever be indebted to the Bhekisisa team for helping me polish the way I write my narrative features.

In the same vein while at SPI, Director Francis Mdlongwa took us to on an excursion to Port Elizabeth where we visited several media houses. This trip has engraved in me the importance of investing in people in order to get the best out of them. Most media houses are lacking behind in this area, especially in the digital age which is increasingly uncertain and competitive.

Q: What are the three most important lessons you took away after completing the PGDip in Media Management at the SPI?

A: Firstly, digitalisation, media convergence, as well as the proliferation of social media. These have dramatically changed the global and local media landscape, posing challenges and presenting opportunities for media companies and The Namibian is no exception. Change is a normal process for the industry and I will make sure The Namibian learns how to use its adaptability to change as a competitive advantage.

Secondly, revenue generation is the saddest of our reality. If we are to remain alive, we need to become creative. The newspaper is learning how to accelerate the flow of media content across delivery channels to expand revenue opportunities, broaden markets and reinforce viewer commitments. To operate in a converged digital environment, The Namibian repurposes its online content and distributes it to multi-platforms. An example would be The Namibian’s educational video clips repurposed to blog posts, social media posts, photographic stories on their website. The Namibia Media Trust has also joined to support The Namibian’s efforts by producing podcasts which give an insight on stories we run. The most recent being #FishRot.

Lastly, the PGDip in Media Management taught me the importance of competitive advantage – as an individual and as an organisation. What you can offer that your opponents cannot do. This has allowed me to deepen and sharpen my theoretical and practical grounding on the current debates and issues which centre on the increasingly contested power and role of the media in a more transparent period of digital and social media, which is also witnessing the emergence of ‘fake news’ and the ‘post-truth era of alternative facts”; as well on policymaking in a discontinuous media-scape.

Haidula graduated from Rhodes’ SPI in 2017. She stated that life at Rhodes was one of the most exciting times of her life and she is thankful to the OSISA (Open Society Initiative for Southern Africa) scholarship for making it all possible.