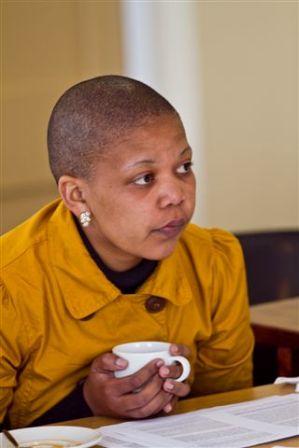 Her paper, entitled “Escaping the enemy from within – the political economy of postcolonial African diasporas, lessons from Liberia”, formed part of the Critical Studies Seminar series currently hosted by the Departments of Sociology and Political and International Studies.

Ms Magadla, who returned to Rhodes in January this year after completing her Masters in International affairs at Ohio University in America, compiled her presentation in preparation for a meeting of the African Union Diaspora Summit next year.

Ms Magadla used the Liberian case study which involved an extension of the Liberian Truth and Reconciliation Commission to members of the diaspora in Ghana, the UK and America to unpack the complex issues related to migration, security and development and considered notions of conflict management, prevention and post-conflict reconstruction. “There has been a global discussion happening around these issues since the early 1990s and Africa is central to this debate.

“The evolution of the AU which recognises the diaspora as its sixth region shows a growing recognition of the potential significance of the diaspora,” she said.

Ms Magadla argued that this discourse cannot be understood outside of the proliferation of civil wars in Africa in the 1990s which challenged the conventional notion of conflict in international relations from inter-state war to intra-state war. This new notion involved the “enemy” existing within the state, such as poverty, which is the leading cause of chronic insecurity in Africa. “Thus the postcolonial African diaspora must be understood within the violent instability of the post Cold War era and as Liberia demonstrates, the postcolonial African diaspora continues to carry the baggage of conflict in their engagement with their homeland,” she said.

Ms Magadla suggested that the diaspora is a significant issue because “it points to our dilemmas with development on the continent”, and that there needs to be facilitation of a broader discussion on issues relating to the political economy of the diaspora and their role in society. She added that the failure of the liberal development agenda is central to the whole debate.

In acknowledging the failures of the liberal development model, ones options of an alternative will be largely shaped by whether or not there has been sufficient understanding of the current system, which requires an analysis of the structures and failures of contemporary African states. In her paper she writes: “ A genuine inclusion of the African diaspora to the continental peace and development agenda must address the traps that bedevilled the liberal peace model which tacitly assumed that development can be ‘brought’ to the continent without addressing the structural weakness of the African state.”

In calling into question the role of the diaspora, she said her paper challenges many conventional viewpoints on political dynamics on the continent, and calls for a thorough examination of the failures of the African state and a restructuring of the relationships between the state, development and security. “I want to encourage other African countries to create better, more nuanced engagements with their diaspora,” she said.