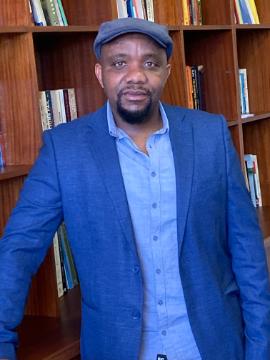 Sonwabile Mnwana is Professor of development studies in the department of sociology at Rhodes University. He is also an honorary fellow at the School of Social and Political Science (SPS), University of Edinburgh (UK).

Prior to joining Rhodes University, he held several positions at various universities, including:

Professor Mnwana is also a National Research Foundation (NRF) rated researcher. He is also a recipient of several prestigious fellowships and awards, including a Visiting Fellowship at Stellenbosch’s Institute for Advanced Studies (STIAS) in 2019, a Residential Fellowship at the Institute for Advanced Studies in the Humanities (IASH), University of Edinburgh (UK), the inclusion of his research report in the Wits Exceptional Research category (Wits University, 2016), and the Vice Chancellor’s Awards for Research Excellence at the University of Fort Hare (in 2019 and 2021).

His teaching and research experience is vast. He has raised research funds and served as the principal investigator for several research projects. Broadly, his current research focuses on land, extractives, and local politics of distribution in rural South Africa. For several years, Sonwabile have led a number of studies that investigate the impacts of mining on land, livelihoods and rural communities. He has published extensively. Sonwabile is also a politically engaged scholar, whose research contributes towards social justice causes.

Between 2016 and 2017, he served as the President of the South African Sociological Association (SASA).

Journal articles and chapters in books: