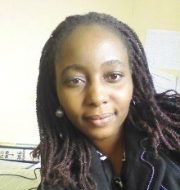 Sandra is a PhD student from Zimbabwe. Her topic is on Understanding Climate Variability and Livelihood Adaptation in rural Zimbabwe.  Sandra holds an MSc in Public Policy and Human Development from Maastricht Graduate School of Governance (Netherlands) and MSc in Sociology and Social Anthropology from the University of Zimbabwe. She is currently a lecturer in the Sociology Department and the Coordinator of the Africa Resilience Network Project at the University of Zimbabwe. Sandra also works with various NGOs such as Women and Law in Southern Africa on various researches and projects on poverty, women’s rights, gender based violence and HIV and AIDS. She is interested in environment and sustainability issues, climate change and adaptation, Land and rural development, gender and HIV and AIDS. Her publications include; Universal Access to HIV Treatment in the Context of Vulnerability: Female Farm Workers in Zimbabwe, (2013),Health Care for Women International, DOI:10.1080/07399332.2013.81022; Black granite mining and the Implications for the development of Sustainability in Zimbabwe:The Case of Mutoko Communities (2013), Environment, Development and Sustainability 15:1527-1541; Transfrontier parks and Development in Southern Africa: The case of the Great Limpopo Transfrontier Park (2013), Development Southern Africa, 30:4-5, 629-639; Globalization, Social Policies and the Nation State, 2013, Journal of Globalization Studies, Volume 4, Number 2 / November 2013; HIV and AIDS Programmes in Zimbabwe: Implications for the Health System (2012), Immunology, Vol2012; From Globalization to Global Sustainability: Perspectives on Transitions (2011), Journal of Global Citizenship and Equity Education, Vol 1, No 1, 2011.