‘Knock & lock-down phoney miracle politic-crony-oracles/ *most beloved for ‘suicide on the rail tracks’/ trains run through the flesh here/ travel not far for head-slices and skin-pieces,” writes Lesego Rampolokeng at the start of his anthology Head on Fire: Rants/Notes/ Poems 2001 to 2011. Lines like this have earned the Soweto-born poet a reputation for being difficult and abstruse, “a tough chew” as Kwanele Sosibo wrote in his 2012 review of the anthology.

Yet to read Rampolokeng’s “ideological militancy” and disillusionment with the contemporary “rainbow fable” as simply “unrelenting desolation” (Sosibo again) is to overlook that deep humanity, self-reflexive irony and wicked humour that has characterised his poetry since his first “ranthology”, 1990’s Horns for Hondo.

“The long walk to freedom wanted to be a march …/ it just had ingrown toenails,” he jokes in Notes from the Smokebefore hitting the reader with a punch line: “with the shout FORWARD!/ came the realisation: our kneecaps had been peeled backwards.”

Elsewhere, in the playful prose poem 9K Blues in Flight, what starts as a homage to Winston Mankunku Ngozi’s bellowing bull (jol’inkomo. ‘mi naw bow’. yakhal’inkomo) ends with the funny-sad realisation: “I’m not a cow, damn.”

A defiant fusion of the tragic and thecomic,theexperimental and the experiential, 9K Blues in Flight, like so many of the poems in Head on Fire, takes the outrages of recent history into a vision where the heart and humour, irony and vulnerability enable the poet to survive and sometimes sing: “I’m drunk (i hope ‘it’s with luv’) … morbid. no good. awrite. delete that. lemme try again: yummiest-choco-to-vanilla-marshmallowedbeyondpunkedoutfantasies&still-a-poem-yet-to-be-written … ah, damn, what am I saying …”

Shedding illusions, but equally refusing the consolations of despair, Head on Fire is a “howl” for our times that teeters restlessly between despair and redemption. Contrary to the myths of capitalism, Rampolokeng insists that there is a choice that has to be made: to sink into comfort or to continue the journey seeking freedom.

It’s this choice he foregrounds in his new documentary film, Word Down the Line.Inavoicethatisatonce mischievous, seething and sardonic, Rampolokeng praises his influences, analyses the politics and aesthetics of the past 20 years, reflects on poverty and repression, and articulates the expansive possibilities and undeniable importance of poetry in South Africa — past, present and future.

Directed by Bobby Rodwell, the documentary sees the poet literally go down the line, travelling the country and tracking down frontline poets who have inspired and provoked him.

In a sequence of interview fragments Rampolokeng laysdown tracks through a landscape that is itself always sliding away, to explore personal relationships and the struggle (emotionally, politically, financially and spiritually) of living a committed creative life.

Following the film’s successful worldpremiere at the Durban International Film Festival, Rampolokeng offers a timely meditation on the word, on politics, on film and on friendship that challenges what poetry does, what it can do, even what it is willing to address as a form.

You’ve always been a poet who has crossed rather than toed the line. Why go on this journey now?

I wanted to “trek” my own, should I say evolution or degeneration? It doesn’t matter. Talk about the people who had brought me there. Had I liked their work or hated it enough for me to want to engage with it, you know? I wanted to see just how in line or out of core my thinking was about our times right now, where this country is, where it’s going, where it’s supposed to be.

Why make a film and not write a book?

Iwanted to make this film for more than a decade. I couldn’t raise the funds to do so. We were only able to make it now because people were jumpingaroundrubbingtheir nuts, saying “20 years of democracy”. The thing is, for [Italian film director, poet and intellectual Pier Paolo] Pasolini, cinema was poetry taken to its logical conclusion. I believe that this film is an audiovisual anthology, that you can have the word unsterilised.

I’m all for the book. I’m all for print. I’m all for page. The smell of it [where] … you can have the word free and unbound; the full experience of it the poet, the poetry, the ars poetica … and by “ars” I mean art, right. You can get the poetry from reading the book. But I think that its purest shot is in film. I love film. I came to the word via film.

Your film raises question about the role of revolutionary poetry today. Is politicised poetry still relevant? I am the last person on the face of the planet who will be prescriptive and say: “This is what your poetry should do, or what poetry should do.” Poetry is a distillation of the universe. That’s what it is. When we attempt to let [ our time on this planet, and [that] of those who came before us on this planet, come together on the tip of a ballpoint pen and explode on the page. That for me is poetry. That’s all.

I wouldn’t jump up and say people [ should write about poverty, about human suffering, about whatever. No. Please! Please, by all means, write about Fluffy, your little puppy. That’s ! Honestly. I’m a great celebrant of the word. I love writing about, oh, you know, oh shit, shit, how “my humpty nose will tickle your rear” … I like that! Okay, you might say that’s sexist. Is it sexist? It’s just telling her that when we are doing the 69, the sharp point, you know, it will tickle your rear. I think that’s a beautiful description of a sexual act.

I don’t demand that people write about children dying with smiles all over their faces. No. But because of my place on this planet, and how I came here and the time I spent here, and what I want to demand of myself is] that I engage with issues other than those, even if I celebrate rears being tickled.

The point I’m trying to make is people write [about] whatever they want to … I love [Robert] Berold; I love Charles] Bukowski. I do not have anything in common with them as far as their socialisation or whatever is concerned, but about what they do with the word. I would not say that poetry should serve this or that purpose. I will say mine will. Which doesn’t wipe out Sylvia Plath. It doesn’t. I love Sylvia Plath. I love Kathy Acker. Oh, I’d marry her any minute.

Can revolutionary or “dissonant” poetry (as James Matthews refers to it) actually be taken seriously if it is penned by poets who now have positions of power? There is an irony that Jeremy Cronin and

Keorapetse Kgositsile have to some extent swapped “staff riding” for government motorcades. Must the revolutionary poet die when he becomes a politician?

As an answer, my question would be this: Are they pulling a Lucas Mangope move? Are they saying that we are waging the struggle from within the belly of this monstrosity — just like Mangope claimed to have been doing within his little Bantustan. Is that what they’re saying?

When I think about that I also think about Pablo Neruda, who was in a situation that allowed him to dictate the fate of his people. Flip that coin and think of this: of Ezra Pound making broadcasts for the fascists. Think of Louis Ferdinand Celine, who spouted the worst possible anti-Semitic statements. Now, are Kgositsile and Cronin on the same page?

We said in this film that to be a poet is about being conscious of your times. I am asking if these people’s voices are tarnished as far as consciousness is concerned because they are in the upperechelons of this monstrosity that is singing to the death of millions of children. Are they lesser poets because they are in that situation?

Should these people be denied their history, denied their talent, denied the fact that they created some of the best possible poetic lines because they are in that system? That is my question. I have gained a lot of inspiration from these people. I respect them. The point of this [film] is for us to hear what our poets have to say about our time, at this time. You know? That’s it. That’s it.

Mafika Gwala seems to be one of the missing voices of our time. How is it possible that one of the country’s great revolutionary poets has been forgotten?

But I got more for him than all these other poets who are now getting all sad and sullen. So my question would be: Does Mafika Gwala want to be Nadine Gordimer and JM Coetzee, you know, a Nobel [Prize] god? What are your concerns? Are your concerns of a different ilk?

Here’s the thing. Mafika brought me to consciousness. I didn’t come to consciousness because of Steven Biko or whatever. I live in Groot Marico now. Before that I was in Clocolan. Which are two of the smallest municipalities in the country. And children are dying there. I have photographs of the water in Groot Marico. It is like coffee, like chocolatebecause it is mainly raw sewage.

There are such gross disparities in this place that when you say every human being has the right to water, like Makahafula says towards the end of the film, you’re oppressed. This is the issue. It doesn’t matter if it’s under democracy or apartheid. It’s not a Marxist or a capitalist issue. It’s a human issue.

When you ask Vonani Bila what his emotional response to contemporary South African democracy is, he replies: “Outrage”. He goes on to say that cataloguing the litany of government corruption exhausts him as a poet. In many ways he seems to have reached the end of the line. How can we keep moving? You know, here’s the thing. Vonani is not saying: “Oh, this weight is so heavy I’m just going to curl up and cry.” That’s not what he’s saying. What I understood him to be saying is this: “My comrades I marched with are the ones who assumed the mantle of my oppressors.”

And these are people I know… But it is much heavier a weight when your comrades assume the mantle of the oppressors you fought down. So I don’t think he’s saying he’s got struggle fatigue! Rather, it’s some kind of twisted Sisyphus struggle. That’s what it’s always been about. You can’t win, but you can’t give up.

Despite the often bleak tone of the documentary, the urgency, power and beauty of the poetry presented seems to impel us to keep striving for the radical futures towards which you gesture. What do you see down the line? As a poet, where do you find hope? Is it in the younger generation of poets that you interview?

You know, from the Free State to the Eastern Cape to the Western Cape, and whatever, everybody is sounding like some third-generation ape mimicking [poet-activist] Nikki Giovanni, who wasn’t even good in the 1970s in the United States!

The sooner we drop that, the better. Then we don’t have to be aping … fuck, [slam poet] Saul Williams — who happens to be the god of these bullshit kids — is regurgitating what [Afro-futurist bandleader] Sun Ra was saying. He is still trying to find his voice.

We need to find the truth, whatever that might be. That’s why I spoke with Makahafula Vilakazi. He’s not one of those Nestum and Purity babies, fashion models and dreadlocked puppies, government-created revolutionaries, you know. 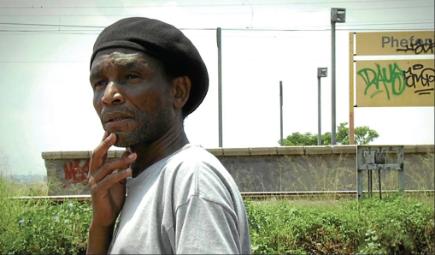 Audiovisual anthology: In his documentary film
Word Down the Line Lesego Rampolokeng travels the country to trace his past and the future of the country.