Sorry there was an error sending your form.
Giving to RU
Rhodes>Psychology>Latest News

Nqobile was the eldest daughter of Hezekiel and Regina Shongwe. She is survived by a younger sister and a younger brother. Nqobile grew up in Swaziland and matriculated at St Michael’s High School in Manzini in 1995, going on to complete a Bachelor of Arts degree in 2001 at the University of Zimbabwe where she majored in English. It was during her third year at the University of Zimbabwe that she became particularly interested in Psychology and decided to pursue it as a career. Part of this interest may have been stimulated by the time she spent in the United Kingdom in 2001 and 2002, where she worked in various care homes caring for the elderly and the mentally and physically disabled and where she registered for a counselling course. On returning to South Africa, Nqobile completed 2nd and 3rd year undergraduate psychology courses at Wits University and proceeded on to do her Honours degree at the University of Fort Hare in 2007. In between her studies and after the completion of her honours degree, Nqobile worked in the corporate field where a previous employer described her as an “analytical thinker with passion and drive”.

In August last year, Nqobile was selected out of 180 applicants to be one of twelve masters student to embark on the clinical and counselling psychology training programme here at Rhodes University. Already, this makes her exceptional. The fact that she was returning to her studies as a mature student, makes her even more exceptional. It was clear from the very first day of this course, early in February of this year, that Nqobile was in the right place – being a clinical psychologist was what she was passionate about and I feel very proud to have had her as one of our students. Not only because Nqobile was an exceptionally hard worker, highly diligent and conscientious, but also because she would have made a wonderful psychologist. Her written work was really very good and I take some comfort in the knowledge that Nqobile received this feedback on her work just last week and I like to think that for a while, in this academically challenging year when it is the norm for students to be beset with anxieties about their progress, she was able to feel proud of what she was achieving. But Nqobile was not just academically solid, she was also a wonderful listener, able to listen both with her heart and her head. Already in the short time that she was here, she had made a difference in the lives of the clients who were privileged to work with her. She had excellent potential – she was warm and strong, a very good combination for working therapeutically.

I know I speak on behalf of all those who were involved in teaching Nqobile at the Department of Psychology when I say that her absence will be felt. Her empathic and calm presence will be sorely missed and her skill and dedication as a budding psychologist is a loss for mental health in South Africa. 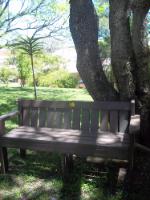