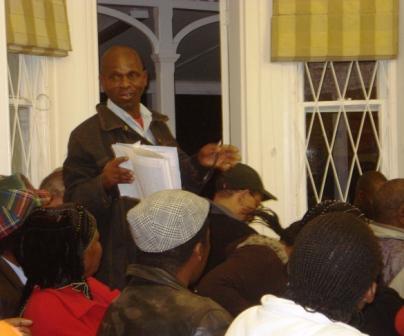 “Threats to the Food Security and Food Sovereignty in the Eastern Cape: Impacts of the Massive Food Production Programme (MFPP), GMOs and cash crops in the Amathole District Municipality,” is a research findings booklet compiled by the Masifunde Education and Development Project Trust, aimed at bringing awareness to the plight of farmers who have become involved in growing genetically modified crops in the area.

Mercia Andrews, an activist who works closely with NGOs such as Masifunde, explained the many reasons for conducting the research included the need to interrogate government’s stance on agriculture, GMOs and the food sector, as well as to investigate the effectiveness of the massive food production programme launched by government in the Eastern Cape. “We saw unholy alliances unfolding between government and Monsanto, and nobody was saying anything about it. We saw a deepening of poverty and people returning to the land for survival, so interrogating these issues was crucial,” she said.

Prof Fred Hendricks, who chaired the event, said he welcomed the findings presented in the Masifunde booklet because they challenge the proposals and findings of mainstream science on the basis of people’s lived experiences with GMO’s. “Science can present GMOs in a very uncritical way as if they are the answer to poverty and food security. This booklet addresses experiences of people on the ground which is very valuable to this debate,” he said.

As part of the massive food production programme, aimed at growing GM crops such as wheat and maize on derelict land in the Eastern Cape, government promised to provide small-scale farmers with subsidies for input supplies, mechanisation, marketing and agro-processing. However, the experiences of numerous farmers who attended the launch run contrary to the promises made by government some years ago.

Gladman Tom, project coordinator of a food production project in Peddie, described his project as disastrous, following failure of government to uphold certain conditions. “Within the first year we had problems. We realised we weren’t winning with government so we aborted the project,” he said. Tom also said that he and his team, who planted canola, soya beans, cotton and maize, had no idea the crops they were farming were GM. “That term is new to us. No one in government explained that to us. We only heard about it after the project had been aborted,” he said.

Nosipho Kondile, chairperson of a GM producing project near East London said her group was completely unprepared for the complexities of the specific cotton crop they were farming, and were left to their own devices by government who showed no follow-up interest in the project. “We didn’t know this was a specific type of cotton with certain requirements. It was hard to grow and after a while we ended up chasing cows into the fields to eat it and we burnt the rest so that government wouldn’t benefit from it,” she said.

Andile Peter, who is involved in a paprika and soya bean project near East London, said he has faced storage and weather problems from the start of the project in 2004. “Government also hasn’t found us the markets they promised, so now we are sitting with three years worth of soya beans that we can’t sell,” he said.

Mariam Mayet of the African Centre for Biodiversity described the government’s food production programmes and the propagation of GM crops as a “violent agricultural system imposed on the poor. Government is invested with the scientists who are lobbying these products while innocent farmers are made to suffer, which is criminal,” she said.

Mayet, who has been campaigning against GMO production for more than 10 years, highlighted problems related to GM crops as including an erosion of genetic diversity, a negative impact on insect ecology and an increase in weed resistance. She said South Africa has been growing its own GM crops since 1999, a fact that few citizens are aware of, and that we are also the only country that eats our own GM crops as part of our staple diet, although the possible health hazards of GM practices have yet to be fully explored. “Even so, it’s one thing to experiment on the South African population like guineapigs with GM food, but it’s quite another to mess about with poor people’s livelihoods. These people are being used as guineapigs in an agricultural project that is doomed for failure. Someone must be held accountable,” she said.

Story and photo by Sarah-Jane Bradfield

Photo: Mr Gladman Tom addresses members of the congregation about his experience with farming GM crops in the Eastern Cape.