Black Man,You Are On Your Own 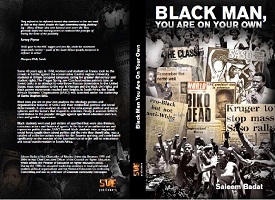 Black Man, You Are On Your Own has its origins in an academic study of black tertiary student politics under apartheid. Commissioned by the Biko Foundation, the original text has been extensively revised to make the emergence, ideas and activities of the Back Consciousness movement, and specifically the South African Students' Organisation (SASO), available to a wider audience. "Black Man, You Are On Your Own" analyses the ideology, politics and organisational features of SASO and their intellectual, political and social determinants. The book also analyses the role played by SASO in the educational, political and social spheres and the factors that shaped its activities. Finally, it assesses SASO's contribution to the popular struggle against apartheid education and race, class and gender oppression.

Between 1999 and 2006 Dr Saleem Badat was Chief Executive Officer of the Council on Higher Education, which advises the Minister of Education on higher education policy. During the 1980s he occupied leadership positions in local and national student political organisations and the National Education Co-ordinating Committee, and was co-ordinator of Grassroots community newspaper.