Sorry there was an error sending your form.
Giving to RU
Rhodes>Biotech>Latest News 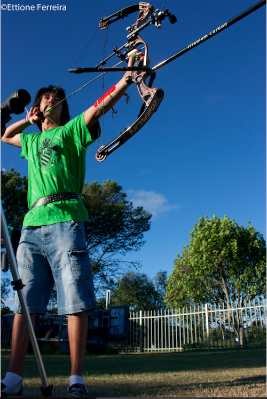 Biotechnology Innovation Centre PhD student Lance Ho, is not just a part of the team developing tools for early disease detection like HIV and malaria, he is also a hot-shot in the archery world.

Currently the coach of the Rhodes University Rhodes Archery Club Coach, Lance Ho has been selected by the South African National Archery Association to serve as team coach of the Junior Protea Squad at the 2015 Youth World Championships. He is currently in Yankton, South Dakota where the championships are being held from 8 – 14 June. Ho will also support the group as assistant team manager.

His name is well known in archery circles at Rhodes and beyond. Lance has been active in archery since 2003 and has been recognized both locally and nationally, representing SA at the 2006 Youth World Championships in Mexico and at the 2011 Universiade Games held in China. Ho was also previously selected as Coach for the 2012 SA Paralympic Team for the Stoke Mandeville Event in the U.K.

Back closer to home Lance Ho was both the 2012 Sportsman of the Year and 2012 Student Coach of the Year at Rhodes University.

When not in the field, he can be found in a laboratory high up in the Biological Sciences Building at Rhodes where he is hard at work on his PhD in Biotechnology. His research focuses on the development of diagnostic tools to detect a range of different diseases. The work is aimed at developing low cost diagnostics that hold the power to save lives, by finding tiny molecules in blood that are the markers of disease. More at www.ru.ac.za/biotech‌