Congratulations to Nkosinathi Faxi from the law Clinic (previously Legal Aid Clinic) who was admitted as an Attorney on the 29 October 2009.

Congratulations to our Legal Theory 1 students who competed in the University of the Free State First-Year Moot Court Competition in Bloemfontein on 9 October 2009. From left to right is Maxine Smith, Armand Swart, Seepheephe Matete and Kirsten Hall outside the High Court in Bloemfontein. Although neither of our teams made the final, the students acquitted themselves confidently and handled some robust questioning from the Bench well. The two teams were accompanied by Mrs Davies and Mrs Kruuse from the Law Faculty.

The 18th African Human Rights Moot court Competition was hosted by the University of Lagos, Nigeria. The Rhodes team consisted of two final year law students: Christopher McConnachie and Roxanne Francis-Pope. They were accompanied by a faculty representative, Ms Mutsa Mangezi. With sponsorship from Schindlers Attorneys the team were able to travel to Lagos where the students’ performance was outstanding. 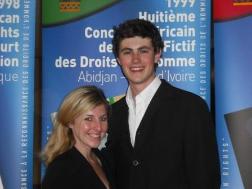 The African Human Rights Moot Court Competition remains the largest gathering of African law students and lecturers on the African continent. It provides law students with a unique opportunity to interact with top students from approximately 80 universities across the continent. Participants compete by arguing topical issues in African human rights law based on a hypothetical case study. This inspires students to think critically about international human rights matters in Africa.

A Warm Welcome to our New Staff!! As seen from Left to Right: 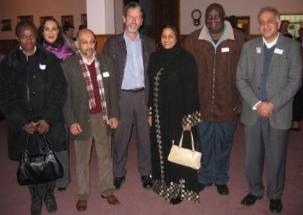 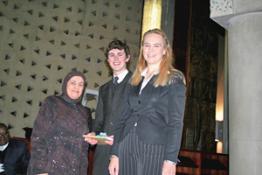 The Ismail Mahomed Prize for Law Reform is a joint venture between the South African Law Reform Commission and Juta & Co. The competition was established in honour of the late Chief Justice and former Chairperson of the South African Law Reform Commission. The aim of this competition, which is an annual event at the SALRC, is to encourage critical legal writing by students, while generating new innovative ideas for the reform of the law. The initiative seeks to encourage legal scholarship and public dialogue on the link between law reform, human rights and the rule of law.

Please visit the following web links for more exposure to these events.

Helen Kruuse, a lecturer in the law faculty, was chosen out of more than 100 applicants to participate in a course on ‘Teaching Law, Human Rights and Ethics’ in Budapest from 6-10 July 2009. The week-long course is part of the Central European University’s (CEU) summer school programme and is run by the Public Interest Litigation Institute of New York in co-operation with Columbia Law School. 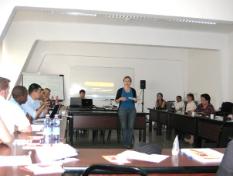 As set out on the CEU website, the goal of the course is ‘to convey challenging material, technical know-how and motivation to a group of young academics, who will be expected to have an impact on reform of higher legal education through their own curricular innovations.’ Helen thoroughly enjoyed the interaction with colleagues from as far afield as Cambodia, Belarus, China, Georgia and Ireland! She also commented on the positive effect the course will have on her own teaching.

Two Rhodes students have been appointed as clerks to judges of the Constitutional Court for 2009. Well done to John Shija and Christopher McConnachie. John and Chris both thoroughly deserve the appointment and we wish them well for 2010.

Melissa Lewis - an alumni of the Rhodes Faculty of Law – recently completed her LLM degree in December 2008, receiving the highest grade point average of any international LLM student in the last eight years at Lewis and Clark Law School in Portland, USA. She obtained her undergraduate LLB and a research LLM (both with distinction) at Rhodes University before being awarded a scholarship by the Skye Foundation to complete another LLM in the USA. According to Ms Lin Harmon, J.D she was an absolute delight and did outstanding work at the Law School. Melissa has also recently represented South Africa at a meeting of the WWF in Croatia. We wish Melissa all the best in her future endeavours! 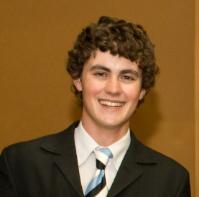 An awards ceremony, sponsored by the South African Law Reform Commission and Juta Publishers, will be held in Pretoria at the end of May 2009. Chris’s essay, entitled ‘“With such changes as may be required by the context” S 13 of the Civil Union Act, Absurdity and Gender Discrimination in South African Family Law’, will be submitted for publication in either the Stellenbosch Law Review or the South African Law Journal. The Rhodes Faculty of Law is extremely proud of Chris and wishes him well!

Notwithstanding the typical Grahamstown weather of rain and shine in close proximity!, the annual Law Market Day at the Rhodes Faculty of Law was held on 5 May 2009. Under the cover of a marquee on the picturesque St Peter's Lawns, law firms, state organisations and NGOs met Rhodes law students on an informal basis. Law students from first year to final year were given the opportunity to find out about the wide array of options available to them when they leave Rhodes. The Law Market Day has become an annual event organised by the Law Students Council, the Faculty of Law, and the Rhodes Careers Centre, and consists of an informal meet-and-greet, followed by a popular cocktail party in the evening. One of the national law firm representatives commented: 'I loved your campus and students, they were truly refreshing ... we hope to appoint a few rodents for 2011." A second year law student also commented: 'What a wonderful opportunity I was able to partake in! All firms and related organisations present at the Market Day were incredibly informative and warm - encouraging for a 2nd Year BA LLB'

In addition to the opportunity to meet and greet the law firms and organisations, the Market Day teatime gave the Student Legal Activism Society the platform to launch their programme on Domestic Violence and Rape. The wonderful work of the students with the community was highlighted as part of the SRC Anti Sex & Gender Based Violence week.

On Thursday April 2 the Rhodes Law Faculty held its moot final competition for the final year LLB students. Each LLB student in the Law faculty is required to partake in one moot in each of their two LLB years, according to Ms Anjanette Haller-Barker, the Moot Coordinator in the Law Faculty. The two best students in each year then argue against one another in the final round.

In this moot it was Christopher McConnachie and Roxanne Francis-Pope who argued for or against the case of the “defective bolt”. The hypothetical case was about a brand new lawnmower of which the bolt came loose and seriously harmed its owner. McConnachie was arguing on behalf of the company, and Francis-Pope was defending the victim.

Judge A. Erasmus, a retired judge from the Eastern Cape High Court presided over the proceedings by invite from the Law Faculty. About Roxanne and Chris, Erasmus said that their “performance was of a high quality” and he wished them both well for the future. Mr. G. Barker and Adv L. Niesing, two lecturers in the Law Faculty, were also judges at the event.

The winner of the moot for final year LLB was Roxanne Francis-Pope and runner up was Chris McConnachie. The winner of the moot for LLB students in their penultimate year, held the previous night, was Ingrid Cloete. The runner up was Cathryn Abrahams. The winners of the moot are presented with Butterworth book prizes, according to Ms Haller-Barker. Roxanne and Chris were also chosen to represent Rhodes at the African Human Rights moot competition which will be held August this year in Lagos, Nigeria.

Chris said that the moot was a “tough, but fantastic learning experience”. His hope for next year is to do an internship in the Constitutional Court. Roxanne aims to do Articles in Johannesburg next year.

It's no April Fools Day! It appears that the Rhodes LLB does not only prepare students for a top ten placing in the All African Moots, articles at a top notch firm and a place in the TV series 'Survivor', but also now as a presenter of the SABC3's new celebrity news show 'Flash' which premiered on 1 April 2009. The Rhodes Law Faculty chuckled this week when they heard - through a Daily Dispatch report - that former LLB student Viwe Soga is 'back on TV and is going bling all the way'!

The Honourable Justice Lex Mpati, alumnus and member of Council of Rhodes University, and President of the Supreme Court of Appeal, officially opened the Rhodes Law Faculty on Tuesday, 24 February 2009. 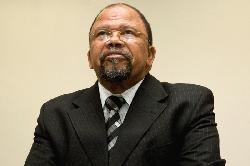 In his address Justice Mpati spoke of the need for legal practioners not to turn a blind eye to social injustices, saying: “Law students must understand that social responsibility is part of legal training.” He praised the work of the Rhodes Legal Aid Clinic, encouraging law students to make a difference in the lives of ordinary citizens by pursuing pro bono work.

He reflected on his choice of studying Law at Rhodes, and said that he had primarily been motivated to champion the cause of the under privileged. He said that, “Rhodes [law] students are privileged to be training at this prestigious institution and must therefore seize all available opportunities to help others.”

The Rhodes Law Faculty has a proud history having come a long way since its inception in 1905. A special blend of theoretical education and practical training has earned the Faculty a sound reputation for excellence in teaching and research over its 104 year existence.Students of the Law Faculty who excelled during the 2008 academic year were presented with awards and certificates by Justice Mpati at the same ceremony.

It is fitting that the awards were presented by a man who embodies a living legacy. From petrol attendant to President of the Supreme Court of Appeal, his rise in the legal profession shows that nothing is impossible for those who pursue their dreams.

The Honourable Justice entered Rhodes in 1980, graduating with a B.A in 1982 and an LLB in 1984. After completing his articles, he practised as an attorney in Grahamstown.

In 1989, he joined the Eastern Cape Bar. During this chapter of his career he championed the cause of the political and economic underdog.

In 1996, he was appointed as senior counsel and a year later he became a judge on the Eastern Cape bench.

Rhodes University bestowed a Doctor of Laws (honoris causa) on him in 2004, a historical year marking the 100th year of the University’s existence and the 10th year of South Africa’s democracy.

2008 saw him appointed President of the Supreme Court of Appeal (SCA), the top judicial position in the country after the Chief Justice.

Justice Mpati is an important symbol and role-model for generations of Rhodians yet unborn, and his presence at the Law Faculty opening was clearly a motivating factor for the current generation of law students in attendance.