Curated by Athina Vahla for the Arts Lounge run by the Visual and Performing Arts of Africa research team, National Arts Festival 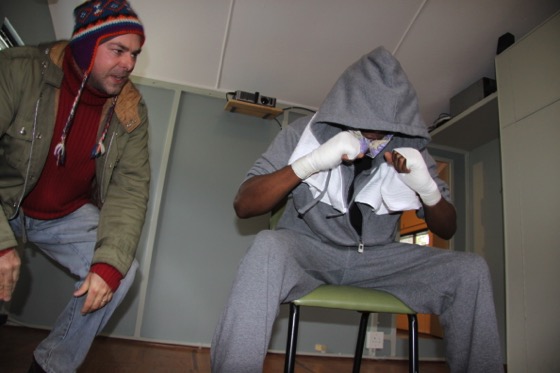 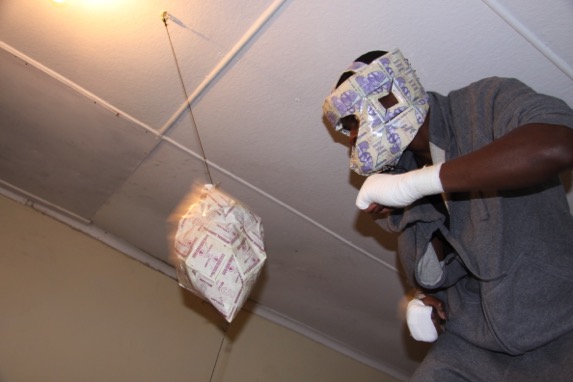 Excerpt from “Between a cushion and a risky conversation” by Rachel Baasch (De Arte 48, 2011)

“Performed by Gerald Machona and Anton Krueger, Ndiri Boxer saw spectators pressed against walls, furniture and other observers. People gathered together in one room (precariously clutching pieces of cake and mugs of gluhwein) to watch Gerald Machona behind his ‘Zim’ dollar mask perform the role of a Zimbabwean boxer preparing to fight. Edging him on as his trainer was Anton Krueger. As the piece progressed, Machona beat at a ‘Zim’ dollar punching bag before moving into the attic to repeat the action on another bag installed there. The audience lingered momentarily before following him into the miniature half- room. Some took tentative glances inside, some crouched down through the door and slid along the walls of the tiny room in an attempt to get a better view, while others left the
space altogether. Both of the bags burst under Machona’s punches, although unexpected and unplanned, he improvised and the tension in the space escalated with the sound of flesh on wood, as he repeatedly punched down onto the skin of broken deflated ‘Zim’ dollar props.

Machona’s choice of material has practical complications. In order to make the objects that he performs, he has to travel to Zimbabwe before smuggling suitcases filled with dollars across the South Africa/Zimbabwe border. In doing so, he risks or threatens his access to the country and thus his registration status for a Master’s degree in South Africa”.