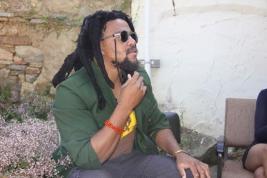 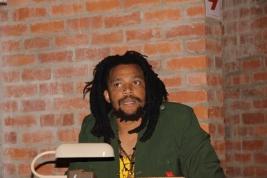 As part of the Contemporary Chinese Art and Cultural Exchange talks at the Fine Art Department in 2011, Ayanda Mabulu spoke about his work as a practicing artist. A resident artist at Greatmore Studios in Woodstock, Cape Town, he grew up in King William's Town and visited China in 2011. Mabulu exhibited his paintings at the Chenshia Museum in Wuhan, Hubei Province and produced an exhibition catalogue titled "Beautiful Imperfection" (Chenshia Museum, 2011). In the foreword, Art Critic and Research Fellow at the China Art Research Institute, Tao Yongbai, writes that Mabulu's paintings reveal the "humanity, glory and victory" of people "fighting against oppression and [the] apartheid system imposed...[on] the people of South Africa by the colonialist and racist regime". Poetically critiquing both South African and Chinese societies, Mabulu says that through his work he tries to see the other side of the moon.

In 2013 Mabulu engaged with Rhodes Fine Art students again, this time via Skype for the student-run Lucid Lunchbox initiative founded by Sikhumbuzo Makandula and ViPAA member Simone Heymans. Thanks to Ayanda who generously gave up time to speak with us on the same day that his daughter, Azania, was born. (Photos: Ruth Simbao).