Sorry there was an error sending your form.
Giving to RU
Rhodes>Cory Library>Gallery

Cory Library through Africa Media Online is currently digitizing a selection of photographs from the Cory Library’s photographic collection. Most of these photographs date back as far as the early 19th Century and they cover important subject areas such as the history and politics of the Eastern Cape; early history of Grahamstown; Xhosa culture and customs; historical figures within the Eastern Cape  and Eastern Cape Missionary history. 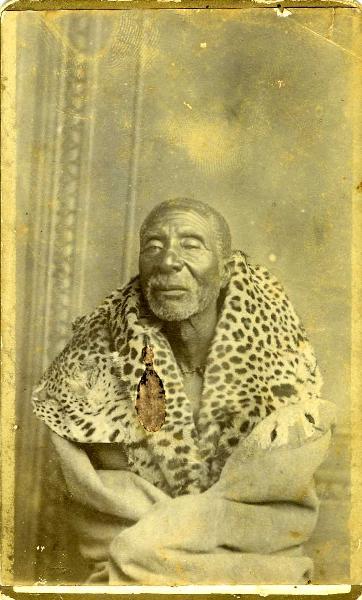 Besides offering worldwide access and enhancing use of the photographic collection, we are also hoping to use digitization as a preservation measure by providing digital content to reduce the physical handling of original, valuable, rare, fragile and frequently used collections. This will ensure their long-term preservation.

This is the second digitizing project that the Cory Library has undertaken, the first being the digitisation of Cory Library’s manuscript material relating to South African freedom struggles. This project was done in partnership with Digital Imaging South Africa (DISA) (Andrew W. Mellon funded) project, under the Southern African Freedom Struggles c1950-1994 project. The digital images will be made accessible from the Cory Library website.

Right: Chief Sarhili (Kreli) c1814- 1892.
Paramount chief of the Xhosa and Chief of the Galeka tribe

(An old, fragile but valuable photograph. Digitization will not only provide world wide access to the digital copy but will also preserve the original by reducing physical handling)