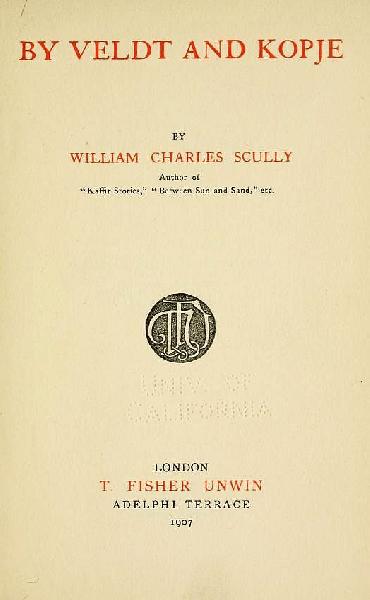 William Charles Scully was born in Ireland in 1855, and came out to South Africa with his parents while still a boy. He found no diamonds in Kimberley, nor gold at Pilgrim’s Rest, but eventually made it into the civil service through his family connections.

His Reminiscences of a South African Pioneer and Further Reminiscences of a South African Pioneer (both 1913) are still worth reading. Selections have recently been published in paperback under the title Unconventional Reminiscences (2006).  They include invaluable accounts of many of the Eastern Cape’s rural districts such as Tarkastad, Graaff-Reinet, Aberdeen, Seymour, Peddie, Mount Frere and Nqamakhwe. He also wrote short stories, some of which have been collected as Transkei Stories (1984). His historical interviews, which appeared in 1910 in a journal called The State, have preserved valuable information though, like all of Scully’s work, they would have benefitted from a less intrusive narrator.

This is also true of “Kaffir Music,” written in collaboration with his wife Nora, which first appeared in the Pall Mall Magazine of 1897 and was reprinted in his collection By Veldt and Kopje (1907). In Further Reminiscences (pp.274-6), Scully gives the following account of how this piece came to be written:

An interesting experience it was when Makaula sent his brother Diko down from the Matatiele border with a lot of picked singers to chant the tribal songs. These my wife noted down and harmonized. One very old man, when he heard the air of the song which had been dedicated to his long dead chief played upon the piano, burst into tears and said he could now die happy, as he knew that the numbers of praise relating to his old ruler would henceforth live in the ears of men. The Baca tribal song is a remarkable production, being quite Gregorian in style. The following circumstance will give some idea of the veneration in which it is held.

I once had occasion to lead a large armed party of Bacas to support an ultimatum which had been delivered to the chief of a neighbouring tribe who had been giving trouble. I noticed that when we marched the tribal song was not sung. I asked one of Makaula’s sons why this was. After some hesitation he told me that as the men forming the “impi” were not satisfied as to the justice of the cause they were being led to support they declined to sing the song of their ancestors.

By veldt and kopje is also available at the Internet Archive