Bird-Lore of the Eastern Cape Province 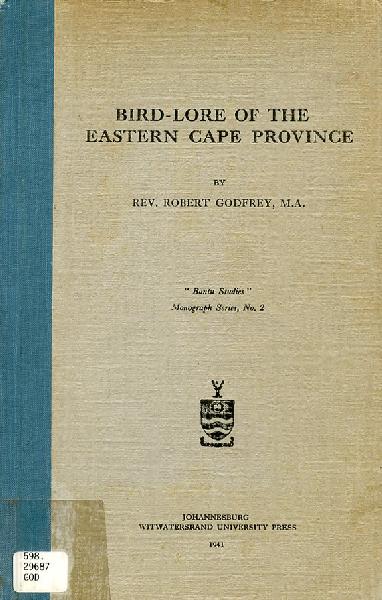 Bird-lore of the Eastern
Cape Province (1941)

Bird-Lore of the Eastern Cape Province

Rev. Robert Godfrey left Scotland in 1907 to join the United Free Church of Scotland mission at Pirie. Always a keen naturalist, once in the Eastern Cape he continued his habit of collecting and describing bird specimens, epecially in the areas where he was stationed: Pirie, Somerville and the Blythswood Institution. Godfrey was also a Xhosa lexicographer; in 1937 he was appointed secretary of the Xhosa Bible revision committee.

"My first fellow-workers in the fascinating study of Native bird-lore were the daughters of my predecessor at Pirie, Dr. Bryce Ross, and his grandson Mr John Ross. In addition, a little army of school-boys gathered birds for me, supplying the Native names, as far as they knew them, for the specimens they bought". (Preface)

The book covers not only Xhosa and Zulu names for birds, but proverbs, fables and stories, interpretations of bird songs, and other comments on natural history by his local informants. Many of the pieces were first published in the Blythswood Review, copies of which are housed in the Lovedale Collection at Cory Library.

The book is dedicated to the memory of John Henderson Soga, "an ardent fellow-naturalist".

In recognition of his meticulous work, The University of South Africa awarded Godfrey an honorary degree of Doctor of Philosophy in 1945.

Bird-lore of the Eastern Cape Province was first published by the Witwatersrand University Press, 1941, as No. 2  in the "Bantu studies" monograph series.