Congratulations to the 2012 Environmental Award winners. They are Brett Sutherland (individual category) and Allan Webb Hall (student society / residence category). Their achievements were honoured at a celebratory function on Friday 5 October, hosted by the RU Vice Chancellor and the Environmental Committee. Dr Saleem Badat congratulated the winners for playing a leading role in promoting environmental sustainability at Rhodes University and beyond. Their names will appear in the Rhodes University graduation booklet, and will also be placed on the Environmental Awards Honours Roll - housed in the RU Library.

At the award ceremony, it was a privilege to be addressed by the legendary Prof Mervyn King‌ - best known for King III and .    (Photo by Steven Lang, Grocott's Mail)

More about the winners:

Brett Sutherland: This young man has a deep-seated passion and concern for the environment which is being affected by human activities. He has worked tirelessly and thoughtfully in developing community relationships, advocating and raising funds for well-managed and sustainable projects, and educating both his peers and the public. He has inspired many people to adopt more sustainable practices. 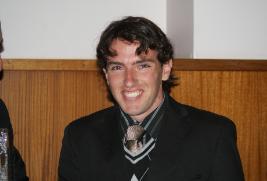 A fellow student, who identified himself as “black, poor and from a relatively rural area of the Eastern Cape”, wrote in his motivation that thanks to the “substantial contribution” of our award winner he has “unwittingly learnt about the environment, its importance and how [to] make a contribution towards the efforts to improve environmental conditions”. We quote this student extensively in this citation.

Before he met our award winner, Charlie felt that all environmentalists were “over-the-top prophets of doom that [asked for] a lot more than we [can] give”. How, he asked, could he understand concepts such as overpopulation and global warming when a simple drive through the Transkei showed “vast pieces of unoccupied land and winter is still just as cold if not colder”?
But our young award winner will not let anyone he meets “remain ignorant on such issues”. In the 5 years that Charlie has known him, there was not a “single conversation that did not somehow end up being about environmental concerns, the need for change, the great work of pioneering environmentalists and the simple difference that one, just one person can make”.

Many fancy terms are bandied about by environmentalists, often with little consideration for people’s contexts. When people like Charlie hear “there is a drought” but open their taps and find that water is still “coming out with the same intensity”, they get confused - surely a drought means ‘No Water’? Environmental messages that feel so distant from reality leave people feeling “unconcerned and distant.”

What is needed is a more sustainable approach that takes into consideration the economic, social and historical contexts of those who are affected. Patience is an essential tool. And most importantly, “practice what you preach”.

Our young award winner demonstrates these qualities. He is “always willing to explain things”, demonstrating amazing levels of patience. He takes the time to learn about a person’s situation and home environment and uses these as tools to help show how a person can make a difference.
Now, when fellow students like Charlie go home for vac and get into conversation with family and friends, they can discuss concepts like overpopulation and global warming, and share ideas for practical solutions. Our award winner’s Worm Farm Project has been such an inspiration that when Charlie’s grandmother heard about it, she was enthusiastic about getting a worm farm for her village garden.

Our young award winner has helped show that “it only takes a little difference to make a big change.” Charlie Mzimane sums it up beautifully: “Out of everything that he has done, it’s the little changes that he has brought into mine and my family’s lives by showing us that change is not something that is beyond us, but rather something that is within our lives. I nominate this young man for the Environmental Award because he has shown me how normal environmentalists are, how understanding they can be, and how much fun can be had in saving the planet.”

Allan Webb Hall: In 2012, the Environmental Representatives in this Hall of Residences continued with awareness-raising activities and promoting environmentally friendly practices, as is required of Environmental Reps on house committees. Each Environmental Rep has continued to promote energy conservation in his or her respective residence, putting up eye-catching posters to remind students to switch off lights and appliances when they are not in use. Likewise, they have organised demarcated containers for recycling paper, glass and wet waste, using the wheelie bins provided by Housekeeping as well as purchasing smaller containers that fit neatly into passageways.

Over and above this, the Environmental Reps in this Hall probably succeeded most effectively in promoting awareness about environmental issues through their innovative model of collaborating as a team – rather than as individuals within their own residences. This collaborative model – in which each Environmental Rep takes the lead in a particular project, with support from the other Reps in their Hall who carry out tasks assigned by the project leader – has resulted in the total of their efforts being far more than their individual parts.

In 2012, their first successful collaborative project was the screening of the climate change movie, “The Age of Stupid”, during O-Week for all first year students and house committee members. The Hall Environmental Reps also lobbied for mass participation amongst their peers in the Green Fund Run, which was held in March. They organised an Earth Hour event in collaboration with the SCR Environmental Councillor, which attracted a huge turnout of students in the Botanical Gardens, despite the freezing weather at the time.

They partnered with a local school, Ntsika Junior Secondary School, in a tree-planting project, which is part of a wider, ongoing environmental and landscaping project. Because of its community engagement emphasis, the Environmental Reps invited their Community Engagement Representative peers in each Hall residence to collaborate with them.

This is the second year that the five Environmental Reps of this Hall have organised themselves to work collaboratively. They envisage that this model will not only be sustained in their own Hall in years to come – through the support and encouragement of wardening staff – but also that Environmental Reps and perhaps also Community Engagement Reps in other halls will adopt this collaborative model.