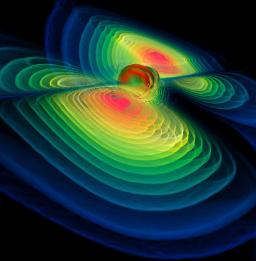 Although they are one of the earliest predictions of Einstein's theory of relativity, gravitational waves have never been directly observed. If detectable, however, they promise to open a new spectrum for observing the universe. Large-scale interferometers currently under construction (LIGO, Virgo) expect to make first dectections within the next five years, opening up the new field of gravitational wave astronomy.I've been particularly involved in studying the two-body problem in general relativity -- the problem of how two black holes orbit each other, creating dynamical distortions in the local spacetime. These distortions have a number of physical consequences which may be observable. In particular, they carry gravitational energy away from the black holes, in the form of gravitational waves.

To study how gravitational waves are generated and their structure, my collaborators and I have built a simulation code which solves the Einstein equations as an evolution problem. This allows us to model astrophysical scenerios such as binary black hole and neutron star mergers, accurately reproducing the local spacetime distortions due to the dynamical gravitational fields.‌

The models which we are simulating are leading to a better understanding of a number of interesting mathematical and physical questions related to the relativistic two-body problem.

On a more technical level, I am working on methods to improve the accuracy of our model code:

(A full list of my publications can be found here.)

If you are interested in doing an honours project related to either relativity and/or computational modelling, please come see me to work out a project that fits your interests. I'm currently offering the following projects:

Title: Geometry of the Kerr spacetime
Prior knowledge: General Relativity, Matlab
Description: The Kerr metric describes the unique solution for a stationary rotating black hole in general relativity. We will explore the properties of this spacetime, possibly including the horizon structure, geodesics and the ergosphere, embedding diagrams, and how to extract energy from rotating black holes.

Title: Simulating the motion of N interacting particles in three dimensions
Prior Knowledge: Numerical Analysis, Matlab
Description: The N-body problem involves predicting the motion of N particles due to gravitational interaction. We will solve the problem using a Matlab code (or computer language of choice) and finite difference approximations. With sufficient progress, we will parallelize the code using MPI (Message Passing Interface) to be run on a supercomputer.

Title: Post-Newtonian simulation of black hole spacetimes
Prior Knowledge: Numerical Analysis, General Relativity
Description: The post-Newtonian (PN) equations are ODEs which approximate
the motion of bodies in general relativity in the limit of low velocities.
We will use low-order PN approximation to examine the problem of two
orbiting black holes, and examine properties of the system, such as energy
conservation and the evolution of eccentricity.

Title: Shallow water wave equation
Prior Knowledge: Numerical Analysis, Matlab
Description: We will develop a computational model for a classic nonlinear PDE describing the motion of a water wave, and examine its properties, including bore formation and the appearance of solitons.
Initially we will construct models in one dimension, and with sufficient progress we'll move on to a two dimensional solution.