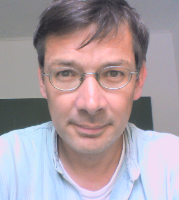 Although they are one of the earliest predictions of Einstein's theory of relativity, gravitational waves have never been directly observed. If detectable, however, they promise to open a new spectrum for observing the universe. Large-scale interferometers currently under construction (LIGO, Virgo) expect to make first dectections within the next five years, opening up the new field of gravitational wave astronomy.I've been particularly involved in studying the two-body problem in general relativity -- the problem of how two black holes orbit each other, creating dynamical distortions in the local spacetime. These distortions have a number of physical consequences which may be observable. In particular, they carry gravitational energy away from the black holes, in the form of gravitational waves.

To study how gravitational waves are generated and their structure, my collaborators and I have built a simulation code which solves the Einstein equations as an evolution problem. This allows us to model astrophysical scenerios such as binary black hole and neutron star mergers, accurately reproducing the local spacetime distortions due to the dynamical gravitational fields.‌

The models which we are simulating are leading to a better understanding of a number of interesting mathematical and physical questions related to the relativistic two-body problem.

On a more technical level, I am working on methods to improve the accuracy of our model code:

(A full list of my publications can be found here.)

My research specialty is in theoretical physics, but I'm happy to consider a range of projects in applied math. In particular, projects involving computational modeling of systems in physics, economics, or biology would be of interest to me. I also work extensively in high-performance computing, so computer-science oriented projects might also be of interest, including algorithms, optimization and data visualization.

Please get in touch with me if you think you'd like to do an honours project along any of these lines, and we can try to work out something compatible with your interests.