Sorry there was an error sending your form.
Giving to RU
Rhodes>Library>About>Library Profile>History of Rhodes Library>The Construction Phase 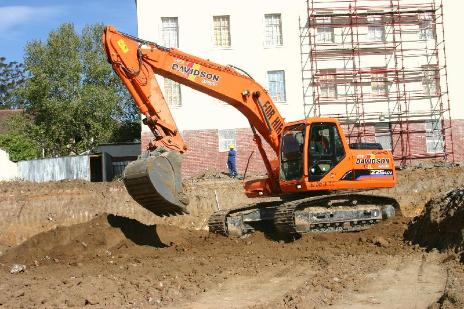 When Vice-Chancellor Dr Saleem Badat took up a spade for the cameras, it was not, in fact, the first sod to be turned on the site. A few short days after the final resolution approving the build was passed, the construction team moved onto campus.

Phase One of the project, the construction of the new building, commenced in September 2008 and achieved its stringent deadline - to be completed in time for the move from the old Library to take place over the December/January holiday period and for the new building to be operational by February 2010, when the students returned to Grahamstown for the new academic year. 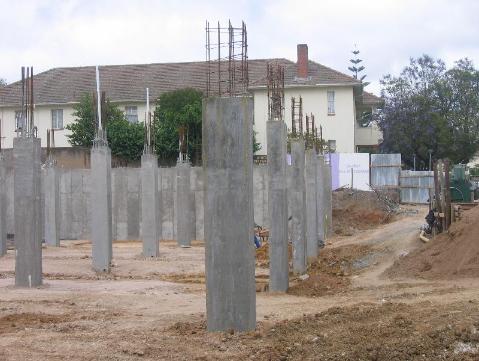 Phase Two, the refurbishment of the old building, in existence since 1961, was then able to commence, and was completed on schedule (in turn). This was no mean feat, as the entire roof of the old building had to be re-tiled with cement tiles, all of which had to be laid by hand as there is no facility for craneage in that area of the campus.

The project was handled almost entirely by Eastern Cape professionals and contractors and has been very much a team effort. The main contractors, Neels Heunis and Duppie Meyer of CM Heunis Building Contractors, and the civil engineering company, MBB Consulting Engineers, are both based in Grahamstown, which conforms to the University's policy of using local resources if possible.

Project Manager Peter May, architect Neill Kievit of Moors, Milne and Kievit and other engineering consultants are based in Port Elizabeth. Architect and Director of Physical Planning at UCT, Geoff de Wet, was consulted regarding the design, because he has done extensive research around the world on campus libraries.

When the new Library was opened on 4 November 2010, Dr Badat was able to announce that the build had in fact come in at a cost of R75 million, which is R11 million or 13% less. He ascribed this achievement to “disciplined and honest project management based on the understanding that we were using gifts and citizens’ taxpayer public funds which had to be accounted for to the last cent.”

The actual period of building went more smoothly than could reasonably have been expected. A Neighbours’ Forum was set up prior to the build, and academic departments and residences in close proximity to the library were invited to meet and air any concerns they might have. Thereafter, email notifications were sent out whenever the use of ground digging machinery, power outages or other disruptions were scheduled. Director of the Library Gwenda Thomas reserves special words of praise for the library staff who, as well as coping with noise and dust, dealt with disgruntled students during the heavy building phase.

Project Manager Peter May says the main challenge of the construction programme was to simultaneously build and keep the Library functioning. This challenge was met by phasing the work, storing low demand book stock off site and scheduling heavy construction work to coincide with student holidays. A part of the existing structure was also handed over to the contractor to work on concurrently with the building site.

Other challenges experienced by the contractor and the Library staff included maintaining building safety in a high foot traffic environment, and switching over main power supply with little disruption while keeping IT supply uncompromised. Keeping the sewers functional also, understandably, ranked high on the list of challenges.

Neels Heunis, MD of CM Heunis Contractors says the best part of the project is to see the library alive with students, who have rapidly filled up the new space: “There’s not an empty seat in the Library”.