Sorry there was an error sending your form.
Giving to RU
Rhodes>Library>About>Library Profile>History of Rhodes Library>The History 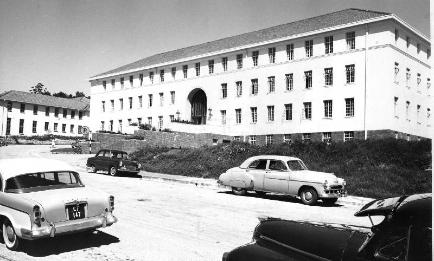 While we celebrate the new, it is good to look back and reflect on the previous incarnations of the Rhodes University Library. A Rhodes alumnus Sue van der Riet, who has carefully collated and compiled a Library history, makes the point that, “it is the nature of libraries to devour space,” and Rhodes has been no exception to this rule.

This lack of space, and the need to accommodate evolving patterns of use, has taken the University's library on a circuitous route – from humble beginnings in a single room in the old Drostdy Building, more than a century ago, to the resplendent building now occupying the heart of the campus, and the title, fitting in so many ways, of 'Rhodes University's most intelligent building'.

A couple of years after the founding of Rhodes University College in 1904, a sizeable library collection already existed, thanks largely to a gift from HM Stationery Office of quarto volumes of the Anglo-Saxon Chronicle. Gill College in Somerset East contributed material from the old University of the Cape of Good Hope, and very soon the Library had outgrown its single room in the Drostdy and moved to a small red brick building, described as squat and hideous, but with at least more room to house the ever-increasing collection. This took place in 1917, and the library remained there for some twenty years.

The end of the Great Depression saw the University able to build the centre portion of the Main Admin Block, and the library moved again, to the space under the clock tower.

A fortuitous visit in 1932 led to good fortune. Reverend Anson Phelps Stokes, sponsored by the Carnegie Corporation of New York, visited Rhodes University College and submitted a full report in which he expressed his admiration of Rhodes and his impression of the inadequacy of the library facilities. “I can think of few more appealing opportunities for library development in the Union than at Rhodes University College in Grahamstown,” Stokes wrote.

Five years later, when money was once again in short supply, this report brought a letter from the Carnegie Corporation with a proposal to grant a Carnegie Library Fellowship for one year, enabling a librarian to be trained in America and with the promise of a “substantial grant for the purchase of books.” This relationship is echoed today, with the Carnegie Research Commons a major feature of the new Library.

Library Fellow FG van der Riet was selected, returning after a year as the first professional Librarian of Rhodes University College. He remained in this post for the next 40 years. Described as a perfect gentleman and an outstanding scholar, under his stewardship the Library grew exponentially, receiving donations of many rare and valuable items.

Van der Riet, with some relief, escaped into retirement just as libraries began to make use of newly available technologies, and computers installed in the Library were an imminent event!

Once again the library was outgrowing its home under the clock tower, having annexed 13 classrooms and studies and the corridor serving them. The University Council afforded this a high priority and by March 1958 a site had been identified and purchased.

Previously the Grahamstown Tennis Club, it was surrounded by academic buildings and residences and regarded as the ideal site. Declared open by Lady Schonland, wife of the Chancellor, in 1961, it made use of a new modular design, which, along with the departure of some major collections such as the Law Library and the National English Literary Museum (NELM) to new homes, meant that it was a further fifty years before space constraints once again dictated the necessity of a new addition to the existing building.

Mrs Margaret Kenyon was appointed University Librarian after the departure of Mr Felix Ubogu to Wits in 2000. Kenyon, a much loved and respected member of the Library staff, oversaw many advances in her time, and she was particularly passionate about the need for an extension to the existing library. Her tragic death in August 2005 came as a terrible shock to all at the University. Just prior to her death, she had arranged for Geoff de Wet, Architect and Director of the Physical Planning Unit at UCT, to visit Rhodes.