Sorry there was an error sending your form.
Giving to RU
Rhodes>Library>About>Library Profile>History of Rhodes Library>The Design and Features

The Design and Features

The Design and Features 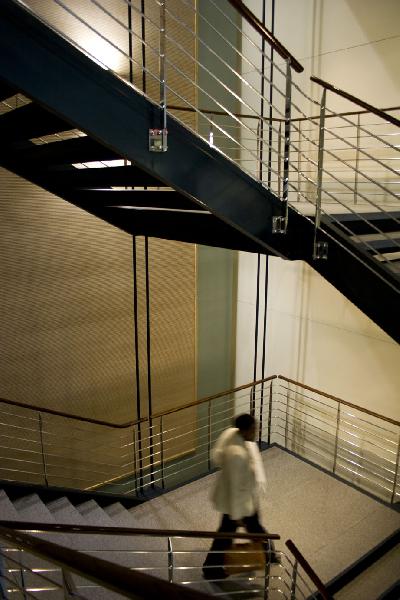 Described by Vice-Chancellor Dr Saleem Badat as the most important project undertaken in Rhodes University's 106-year history, the new Library is a triumphant addition to the campus, its architecture blending seamlessly with the surrounding buildings. But while from the outside it doesn't appear vastly different from the older buildings on campus, many of the features incorporated into it are startlingly 21st century, designed to bring the library into the modern, sustainable age.

Structurally, the fact that the new wing was added onto the old created probably the greatest challenge - in terms of creating an exact fit for the roofing and linking the services. Some excavations also took place to link a new basement area with the old one.

In terms of architectural aesthetics, the window arches from the 1961 library have been retained, as have the double height glass doors, now converted to an arched window overlooking an infinity pond and with a grand view towards the clock tower. The infinity pond provides not only a pleasantly Zen-style addition, but prevents alumni like myself from trying to enter the library through the old doorway which is no longer there!

In keeping with the desire to keep the build as 'green' as possible, trees in the quad around the construction area were preserved, and the indigenous trees which had to be removed have been carefully replanted. The Grounds and Gardens department at the University is working on a plan for the indigenous greening of the area around the Library.

A notable design feature within the building is the hanging staircase, which is a steel structure suspended from the roof with rods. The total structure weighs 15 tonnes, and each granite step weighs 90 kilograms. Designed and built by a company from Port Elizabeth, the staircase draws the eye as you walk through the new entrance.

A Building Management System has been installed, and the layers of intelligence built into this system include access control, surveillance, lighting control and an IP (Internet Protocol) telephony system. A wireless network system has been installed but, as the demand may be more than the network can adequately manage at times, the building has been wired too, so that internet access is always available.

Design features which increase the green profile of the building include recessed windows that can be opened, reducing the need for air-conditioning. The windows themselves have sun-screening and solar glazing built in, and the thicker walls help in climate moderation. Ceiling fans are in place and in areas with many workstations, air-conditioning units have been installed, but are to be used as a last resort.

A Night Flushing System is in place, with various shafts situated throughout the building. These shafts have a fan at the top to draw out hot air at night, and allow cool air in. The arrangement of seating is window driven, which allows people to make use of natural light to work by. Custom recycling bins are present, and there is a waste store facilitating the recycling of dry and wet waste.

The design of the new Library has specifically taken into account the needs of physically challenged users, with the installation of wheelchair lifts and workstations designed to be used by people in wheelchairs.

The new Library has doubled the floor space of the facility to 9000 square metres. The old building had a mere 400 seats available to students, whereas there are now 1100. There are 178 computers in public areas, 158 of which were donated by the Dell Foundation of South Africa, and over a hundred more in the designated study areas.