Sorry there was an error sending your form.
Giving to RU
Rhodes>Library>About>Library Profile>History of Rhodes Library>The Grand Opening

One of the most important projects undertaken in Rhodes University's 106-year history came to triumphant fulfillment on the evening of 4 November 2010, when the new Library was officially opened. Wide-eyed students crowded against the large glass windows of the “chill corners”, watching dignitaries and guests arrive.

The chirrups of swallows and the murmurs of the 250-strong crowd were the only sounds in the quad as the sun broke through the low-lying cloud and bathed the new Library, roofs and fields of Makhanda(Grahamstown) in the warm glow of evening light.

The new wing of the Library has been so carefully designed and constructed that I, as an Old Rhodian, could not tell where the old building ends and the new begins. The careful retention of the original high arched doorway, now a spectacular window, is the only clue to its earlier incarnation. 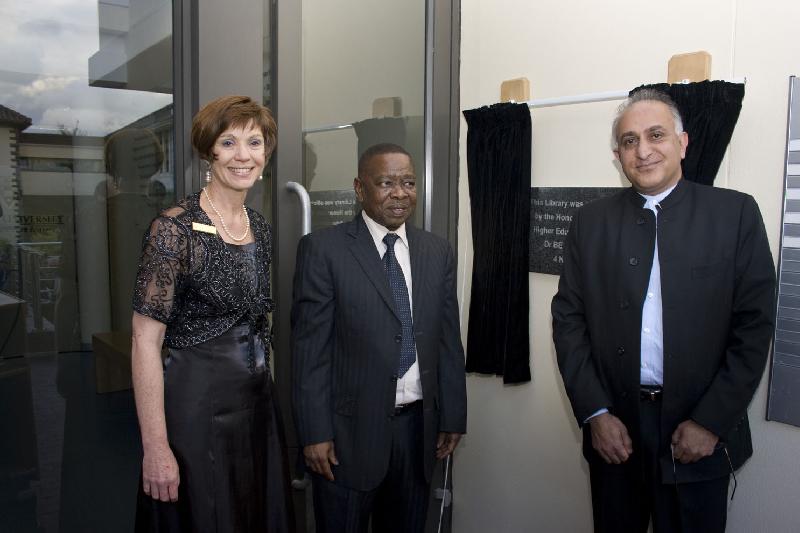 Dr Saleem Badat, Vice-Chancellor of Rhodes University, welcomed to the opening ceremony the Honourable Minister of Higher Education & Training, Dr Blade Nzimande, Mayor of Makana, Mr Lwana, MEC for Education, Mr Mahlubandile Qwase and for Sports, Recreation, Arts & Culture, Ms Xoliswa Tom, the Rhodes University Council and the Chairperson of the Board of Governors Mr Trevor Evans, and members of the Board. Also warmly welcomed were representatives of foundations, donors and business, particularly the representative of the Carnegie Corporation of New York, Dr Rookaya Bawa.

Ms Thomas was the first to take the podium. The birth of a new Library, she told the crowd, “celebrates a community of hope formed around a common sense of purpose at Rhodes University – that which our Vice-Chancellor, Dr Badat sums up as, 'a voyage centred on the pursuit, making and sharing of knowledge.'”

Having thanked profusely all those involved in making the dream of a new Library into the reality before us, Thomas finished by addressing Minister Nzimande, and saying that “the opportunity to have been part of this prestigious Library Building Project from start to finish is a privilege and opportunity that few Librarians experience during their careers.”

Allan Magubane, the newly elected leader of the Rhodes SRC, then stepped up to the podium to say a few words. Magubane praised the new Library's employment of upwards of 40 students on a part-time basis, and drew laughter from the audience with his well enacted 'vox pops' based on a snap survey he conducted of students using the new Library. He grew serious again, however, as he spoke directly to his fellow students, telling them that with this new resource-rich facility, the source of knowledge had been entrusted to them, and great things will be expected in return. “We can never,” he said, “claim that we didn't know.”

The guest speaker of the evening, Dr Blade Nzimande, Minister of Higher Education and Training, was then introduced by Dr Badat. Dr Nzimande began his speech by saying what pleasure it gave him to be opening such a wonderful building. In this modern age, the importance of a Library of this calibre, which can provide both digital access and study space can not, he said, be overstated. Despite being a self-confessed “old-fashioned person who likes the smell of a book,” and who is nervous when using his IPAD, Dr Nzimande stressed the importance of balancing these needs.

The Department of Higher Education & Training’s Infrastructure and Efficiency Fund contributed R50 million towards the building of this Library. Dr Nzimande warned though that there is no such thing as a free lunch. He has, he pointed out, signed a performance agreement with the President, and he put Rhodes University on notice that he expects no excuses when it comes to helping him fulfill it!

There are four universities in the Eastern Cape, among which the Department of Higher Education wishes to encourage collaboration. “A Library of this quality has the ability to nourish the entire province,” Dr Nzimande told the audience. Rhodes University is an important contributor to the key outcomes agreement, and he hopes that the new Library will make the University even more accessible to those from poor backgrounds who are academically capable. Nzimande also praised the improved access for disabled students and academics. 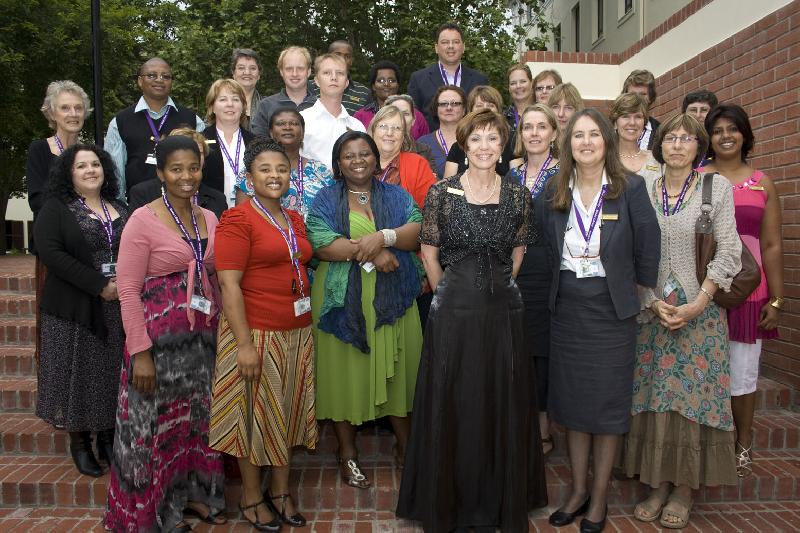 RU Library staff at the opening

Reminding current students of how lucky they are to have the opportunities offered to them, Dr Nzimande recollected the days when he was at university during the apartheid era, and required his VC's signature to gain access to library books on the 'banned' shelf. He finished with a direct instruction to the students of Rhodes University to learn, learn and learn!

After the unveiling of the plaque, and before the guests filed in to the basement area for the cocktail party and tours of the new Library, Dr Badat made the following statement: “We pledged to you that we would use your investment scrupulously, creatively and wisely. I trust that you are pleased with what you see and will see, and that you will grant that that we have discharged our pledge with grace and style.”