Zoliswa “Zoe” Nhleko studies white rhinos in South Africa. So why is she 8,000 miles away at the University of Florida?  Nhleko, a junior scientist with South African National Parks, came to UF to study wildlife ecology and conservation. She’ll use what she learns in her doctoral program to protect the species from extinction.

Rhinos were brought back from the brink of extinction in the 1960s, and now they’re threatened again. To think we've let it get to this point is devastating,” she says.

After getting degrees in zoology and environmental management from Rhodes University and the University of South Africa, Nhleko landed a high-paying job with a water-purification company. Then she heard about the opportunity to work at Kruger National Park as a junior scientist, “basically an extended internship that gets you through your next degree.”

While it was hard to leave the security of her job and start school again, Nhleko made the leap.

“My friends who graduated from high school with me in 2003 have been working for a long time, and I'm still in school,” she laughs. “At the end of the day, I am so exhausted, but I like what I'm doing.”

"I asked a regional ecologist, ‘What are the questions that you really need answers to, but don't have the manpower?’ One of them was the reproductive success of black rhinos. Are they reproducing or not? What is happening with the population?”

The question appealed to her for its far-ranging impact. As a keystone species, rhinos anchor their ecosystems, which means management strategies that benefit rhinos benefit other species, too. And as part of the Big 5 — the charismatic megafauna on every safari-goer’s wish list — rhinos drive tourism, which supports one in 12 jobs in South Africa.

Typically, junior scientists at Kruger study at South African universities. But Bob McCleery, an associate professor in the UF/IFAS Department of Wildlife Ecology and Conservation, had heard about Nhleko through contacts at Kruger and offered her a spot in his lab.

“After meeting her and seeing the kind of potential and passion she had, we decided we would try to bring her here,” he says.

Nhleko does coursework in Gainesville during the academic year, then spends the summers studying white rhinos in Kruger — a biodiversity hotspot the size of New Jersey. Since the rhinos she studies have radio tags, satellite data can tell her what her subjects are up to at all times. She wants to understand the long-distance movements of white rhinos, which aren’t known to migrate. 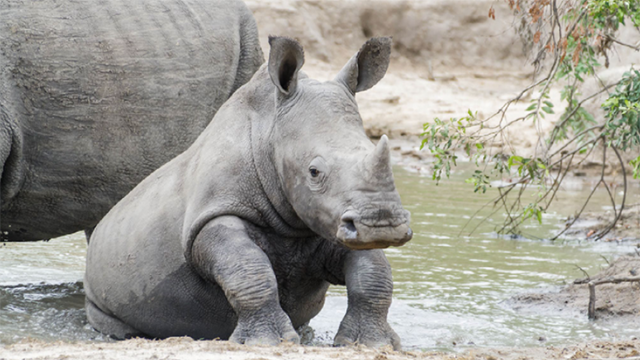 “They stay in an area for a long time, then seem to just pack up and move great distances before settling in new areas again,” she says. “I will be trying to tease out what triggers them, which individuals do these movements and whether they occur all year round or during certain seasons.”

In addition to her research, she also makes time to talk to non-scientists about conservation, not just as a societal goal, but as a career.

"We need to engage people when they are kids, make them aware of the opportunities. They don’t realize they could work in this field.”

After completing her doctorate, Nhleko will return to the South African National Parks, where she’s hoping her presence helps expand people’s conception of what a conservation scientist looks like.

“I’m hoping to get more girls interested in this sort of job so we can be the norm in that space. We also need more black people in higher and middle management, not just as rangers. I hope I can encourage that.”

Her stature as a role model got a major boost last year when the Johannesburg-based Mail & Guardian featured her as one 200 notable young South Africans, putting her work in front of mainstream audiences.

“It's not a career where you get rich, but there's fulfillment that comes from the fact that I'm working toward a greater good. I want young people to know that there are so many jobs where you can get fulfillment, not just make money. Follow what you want to do. If a job isn't taking you where you want to go, follow what you're passionate about.”

For Nhleko, that means averting the avoidable tragedy of extinction.