Purple Thursday was started by the SRC in 2011 to promote university life for current students, to unite all Rhodes students and alumni and to accentuate the pride in being a Rhodian. The university is composed of a unique blend of students, alumni and staff and as with any society, place or field of work, certain groups tend to stick together. Purple Thursday is designed to bridge these factors and every Thursday the university unites in wearing a touch of purple to show their pride in being part of the Rhodes family. Our alumni were invited to join us via facebook and e-mail and we received a heart warming response!

Every Thursday our campus is flooded with purple clothing and we have Old Rhodians all over the world remembering their alma mater by wearing an item of clothing that is purple: We have started an album with a few pictures and memories that our alumni have sent in and if you would like to add to it, please e-mail: m.kila@ru.ac.za "During a state of emergency and the final days of apartheid, huge marches took place in South Africa’s cities. They were organised by the Mass Democratic Movement as part of its Defiance Campaign, and led by political, civic and religious leaders like Archbishop Tutu.

The protestors demanded an end to apartheid, racism and injustice, and the creation of an equitable and just democracy.

During one such march, in Cape Town in late 1989, police used a water canon to disperse marchers. The canon also sprayed marchers with a purple dye, in order to be able to identify and arrest protestors. 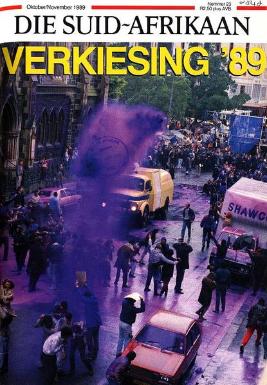 That evening, a slogan was painted on the Townhouse in Greenmarket Square. It read: The Purple Shall Govern– a play on the famous words of the 1955 Freedom Charter: ‘The People Shall Govern.’

The Purple Shall Govern subsequently became the title of a 1991 book, one of whose editors was the late Rhodes alumnus and indomitable anti-apartheid fighter, Dr Margaret Nash.

That the Purple Reigns Supreme, and

That the Purple Shall Govern: in terms of societal and individual values, leadership conduct and deeds

Help us to understand that leadership is everyone's task and responsibility, and the realmeaning of the slogan, ‘Power to the People’

Inspire us to humble leadership in the classrooms and schools of our lands; in hospital and clinic dispensaries; in legal practices, prosecution offices and courts; in research institutions and scientific laboratories; in universities and media, and in financial and public services

Commit us to embrace the idea that

The leader is best

When people are hardly aware of his existence
When his work is done, his aim fulfilled
The people say, 'We did it ourselves.’(Lao Tzu)

Help us to reflect critically on moral issues and pursue the Truth that derives from knowledge, understanding and reason, and from open intellectual debate

Develop in us the Virtue of imagination, creativity, perseverance, respect for the innate worth and dignity of all, human rights, social justice and social compassion, and an unwavering commitment to non-racialism, non-sexism and respect for difference and diversity, whetherrelated to ‘race’, gender, nationality, sexual orientation, language or culture

Build in us the Strength of courage and boldness to publicly speak truth to power, and to remake our society as a vibrant democracy that advances equity, environmentally sustainable development, social justice and the interests of all.