We would like to wholeheartedly thank you for your donations for the Rhodes University Chamber Choir’s international tour to Namibia!

Without your incredible generosity, this tour would not have been possible!

In order to provide a small idea at what you helped make a reality, here is a short description of our tour, along with some photos.

The tour began early on the morning of the 27th of August, as we set off by bus for Namibia, from Grahamstown. The next day, and a total of 23 and a half hours later, we arrived in Windhoek, the capital of Namibia. Immediately, we went into our first rehearsal with the UNAM (University of Namibia) Choir – the first of three choirs we would be meeting, sharing music with, and performing together with. The entire choir agreed that albeit after a very (very) long drive, the vibrancy we were met with was memorable, and the afternoon was spent learning Namibian music – a piece in Nama-Damara (one of the local languages), an Italian piece, and two traditional South African pieces, taught to UNAM Choir by two of our choir members, Orateng Tsokolibane, who taught them Keio Neille Rato, and Kutlwano Tshekiso Kepadisa who taught Ndawanabana Bachiko.

This was the general program that most of our workshops with the other choirs encompassed – our choir members would teach the two abovementioned songs to the other choir, we would learn Namibian music, and these would be performed together in a joint performance.

The next day, we left Windhoek for the coastal town of Swakopmund, and had an evening concert at the Lions Old Age Home there, which was a great start to the week. 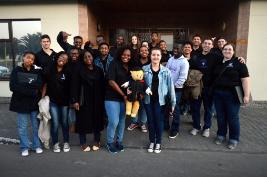 The next day, we had a full afternoon rehearsal with the Mascato Youth Choir, led by the two respective conductors, Theodore Cookson and RUCC’s Andrew-John Bethke. The concert that evening moved us all, beginning with MYC, followed by our repertoire, and ending with three pieces performed together.

The following day, we had off, and used to enjoy the beautiful coast of Namibia, enjoy Namibian cuisine by having traditional Kapana (braai-meat) for lunch. The evening was spent on a dune just outside Swakopmund, with a view of the Atlantic Ocean on one side, and the Namib Desert on the other. 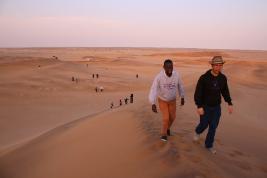 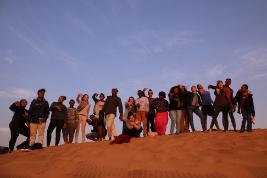 On Thursday, we travelled back to Windhoek, in time for our evening Alumni Concert at the Lemon Tree in Windhoek. This event was called Vocal Fusion, and the stage was shared with the UNAM Choir, with two individual programs and a shared program with the songs we learnt on Sunday afternoon. The evening was a great success, and enjoyed by all.

Friday was spent having a look around Windhoek, and ended with an evening rehearsal with the last choir we would have the pleasure of meeting, the COTA (College Of The Arts) Youth Choir, with their conductor Fanie Dorfling. Again in this rehearsal, four songs were shared between the choirs – two traditional Namibia, and two traditional South African pieces. Fortunately, we learned that the two choirs had one other piece in common – a beautiful composition by Eric Whitaker called Lux Aurumque, which we also used in our final concert, which took place on Saturday night in Windhoek. 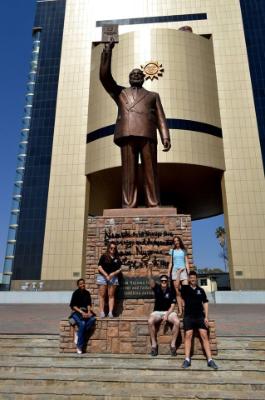 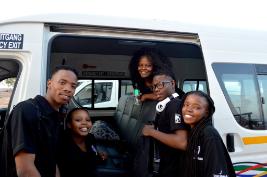 Overall, our experiences with the three choirs lead to the sharing of music from two different African countries, and a great deal of friendly relationships being formed. Meeting a world-class choir such as this was truly an honour, and the time spent making music together with them was an unforgettable experience. The Namibians that hosted and took care of the RUCC along the way were all incredibly generous, and so we wish to send a special thank you to them. The conductors of the choirs were all incredibly enthusiastic about engaging with our choir, and truly a pleasure to work with. We have made plans to continue using the songs we were taught during the tour – and would like to extend our greatest thanks to Mascato and their conductor Theodore Cookson and choir administrator Ailly Namupala, to Bonnie Pereko and the UNAM choir, and to Fanie Dorfling and the COTA Youth Choir, for their open, welcoming attitude and wonderful enthusiasm for teaching us their music.

Thank you once again to our incredible Alumni for donating to the Rhodes University Chamber Choir.