Give 5 is a fundraising campaign run by students to raise money for fellow students.

It was originally launched in 2004 and ran annually until 2009 when it was discontinued due to a lack of ownership.  2012 saw the re-launch of the campaign – it will be run annually by the SRC with the Rhodes Alumni Development office, thereby ensuring that the campaign will have continuity.  The campaign is aimed to provoke a spirit of philanthropy in students and provides them with an opportunity to help “one of their own.”  The success of the Campaign relies on the Community Engagement Representative and the Senior Student from each Res to galvanise the students into planning and participating in the fundraising activities.

Students are invited to contribute R5 during the campaign and healthy competition is encouraged between the Halls and Residences with a prize for the one that collects the most money.    The Campaign will run one week a year, with a 5m Fire Walk either starting the campaign or ending the campaign.  The Fire Walk symbolises that life can be uncomfortable, however with the right attitude and support, one can overcome all obstacles and view them as a challenge rather than a problem.

Money will be raised under the umbrella of the Rhodes Annual Fund and the project chosen will be one that helps current students financially.  This means that the students are raising money for one of their own, creating a wonderful opportunity to make it more personal for the donors within our close knit community and enabling them to see the benefits of their fundraising. Currently, the money raised annually,  has been used for the Pocket Money Fund which aids students who do not have enough money to buy essentials with an amount of R170 per month for ten months of the year.  Any student needing aid via the Pocket Money Fund can apply at the Student Financial Aid Office. The Director of Student Affairs works closely with the Financial Aid Office in dispensing the available money to the recipients.

The amount of money raised during this one week campaign is crucial to the Pocket Money Fund.  R72 000.00 was raised in the one week of the 2015 Campaign with a further R21 000.00 being added by continued fundraising activities by the students throughout the year.  The large amount raised is phenominal and displays the ethos of our current students - caring, capable, efficient and supportive of their fellow students.

The Community Engagement Reps and the Senior Students from each Residence, including the Oppidans will liase with the the students in their Res to work out their fundraising initiatives and help to put it into action.

Stickers, pens, posters and collection boxes will be issued to the volunteers along with a sheet to record which residence and hall the money comes from.  The money  will be tallied daily and a running record of the best Hall and Residence will be sent out to the students from the Alumni Office .  Collection tables will be set up and many other innovative ways that our current RADical Rhodents can think of will raise funds for this cause.

The Give5 Trophy will be awarded to the  Winning Hall.

The Winning Residence will win a Flat Screen TV. 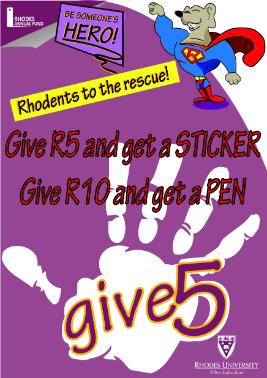 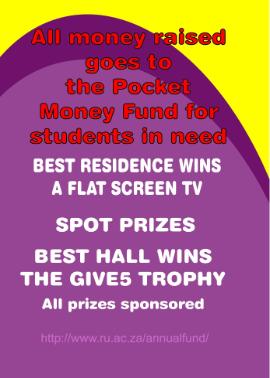