The 2014 give5 Campaign started officially on the 3rd March and ended on the 9th March.  The give5 Committee, Senior Students and Community Engagement Reps had some kind of magic this year as they managed to raise R95 600.00 in one week which was topped up by R10 000.00 from GBS Bank to make the grand total of R105 000.00! 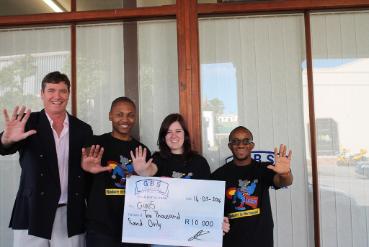 Special mention goes to GBS Bank for challenging the give5 Committee to keep raising money and rewarded them generously by donating R10 000.00

The recipient for give5 2014 is once again the Annual Fund Pocket Money Fund which currently assists 150 students with R170 per month.  These students might be on bursaries, but do not have any extra money to help them buy essentials such as deodorant or soap.  Our current students have taken this cause to their hearts and were determined to make a difference this year in helping their fellow Rhodents . The Alumni Office and give5 committee spent the whole week counting all the money that came in after the campaign and were completely overwhelmed by the rand value that had been collected. What they were even more proud about, was the fact that every single Residence, including our Oppidans had participated,  making it a 100% contribution from our Rhodes students.

On the 7th March, the Fire Walk took place on the Drostdy Lawn where 41 students and staff walked over 5m of red hot coals!  The Drumming Society and Fire Poi Entertainers volunteered to come along and create a celebratory atmosphere and a wonderful evening was had by all with only two Fire Walkers reporting with blisters the next day.

To view the videos from Activate and OppiTV on the Firewalk, please click on the links below.  To view pictures of the Fire Walk, please have a look at our Gallery.

Give5 was originally launched in 2004 and ran annually until 2009 when it was discontinued due to a lack of ownership.  2012 saw the re-launch of the campaign – it is run annually by the SRC with the Rhodes Alumni Development office, thereby ensuring that the campaign will have continuity.  The campaign is aimed to provoke a spirit of philanthropy in students and provides them with an opportunity to help “one of their own.”

Students are invited to contribute R5 during the campaign and healthy competition is encouraged between the Halls and Residences with a prize for the one that collects the most money.    The Campaign will ideally run twice a year with each collection period lasting the duration of one week.

Money will be raised under the umbrella of the Annual Fund and the project chosen will be one that helps current students financially.  This means that the students are raising money for one of their own, creating a wonderful opportunity to make it more personal for the donors within our close knit community and enabling them to see the benefits of their fundraising.

Stickers, pens, posters and collection boxes will be issued to the volunteers along with a sheet to record which residence and hall the student donating the money belongs to.  The money will be tallied daily and a running record of the best Hall and Residence will be sent out to the students .  Collection tables will be set up and many other innovative ways that our current RADical Rhodents can think of will raise funds for this cause.

The Hall that collects the most money wil be awarded give5 Trophy.

The Winning Residence will win a Flatscreen TV.