On the chilly night of 3 July 2018, Deputy Vice-Chancellor Dr Peter Clayton addressed “Rhodians old and established”, as he put it, at the annual Old Rhodian Festival Cocktail Party that took place at Alumni House at Rhodes University.

Dr Clayton, himself an old Rhodian since 1976, was standing in for Vice-Chancellor Dr Sizwe Mabizela, who was attending an all-important BRICS Universities meeting.

Speaking to some of the developments at Rhodes, Dr Clayton proudly declared that, in the first semester, first year students took out a third more books from the main library than their 2017 predecessors. There was also an increase the number of students who attended lectures this year - the fruits of which were hopefully reaped during the release of the first semester examination results.

Old Rhodians were pleased to hear that their former residences were being renovated as part of a programme by the University to ensure the upkeep of buildings. Regarding the growth of the University, Dr Clayton spoke about the three brand new residences at the top of the hill, which brought the total number of bedrooms to 3842 and the number of meals served daily to around 11 500. Other developments include the re-offering of the Bachelor of Education for Primary School teachers, a qualification that was taken over by Fort Hare University after Rhodes University’s East London education campus was dissolved. 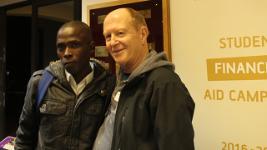 This news brought a slight reminiscent smile on the face of Old Rhodian Mrs Nomalizo Kukisi, who was a first year student in 2001, studying towards a Diploma in Computer Literacy at the East London campus. Mrs Kukisi said it was not difficult to get into Rhodes and neither was paying for it, since she had a job while studying. She believes in donating to the Old Rhodian Union Fund to help pay for future Rhodents, which she hopes her children will be.

Prof Walker, who is the President of the Old Rhodian Union, announced that an amount of R225 000 has been awarded to children and grandchildren of former Rhodes students and employees who were with the University for at least a year.

This is something that resonated with Mr Vincent Nquvu, a Grahamstown local who registered at Rhodes in 2007 for a Bachelor of Arts in Politics. Mr Nquvu studied through NSFAS and in 2007, he said, there were only three people from his area at Rhodes University, something that has greatly improved. As a Mankayi Enoch Sontonga (formerly Piet Retief House) old boy, Mr Nquvu was pleased that the University is changing names of residences, as it shows that transformation is happening at the University.

The night ended in high spirits as Dr Clayton announced the upcoming 66th wedding anniversary of Bill and Kit Mills, who met as students at Rhodes between 1947 and 1950, and were married 2 years later in 1952. Mr Mills graduated with an Honours in Economics and later returned to work at the University until he retired. 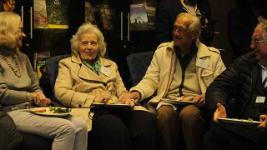 Donations to the Old Rhodian Union can be made online via credit card, at the following link: https://www.ru.ac.za/donate, or you can contact Terryl at t.mccarthy@ru.ac.za for the banking details to donate monthly.

The MySchool card is also another way to contribute at no cost to yourself. Simply swipe when you shop at participating outlets, and a percentage is paid into the Old Rhodian Union Fund.

Please access the online application and register Rhodes as the beneficiary.