“Living and learning together, we will strive to create an environment that promotes the realisation of each individual's full potential by valuing comradeship, perseverance, leadership and academic excellence through service above material gain and personal reward and by recognising the fundamental equality and dignity of all our residents.”

All the residences of Lilian Ngoyi Hall have their own individual Community Engagement programmes. These projects are run and managed by the students in the hall, under the guidance of the relevant Warden. These projects have clearly had an impact at the relevant organisations, particularly on the lives of people less fortunate than themselves, as well as on the environment. 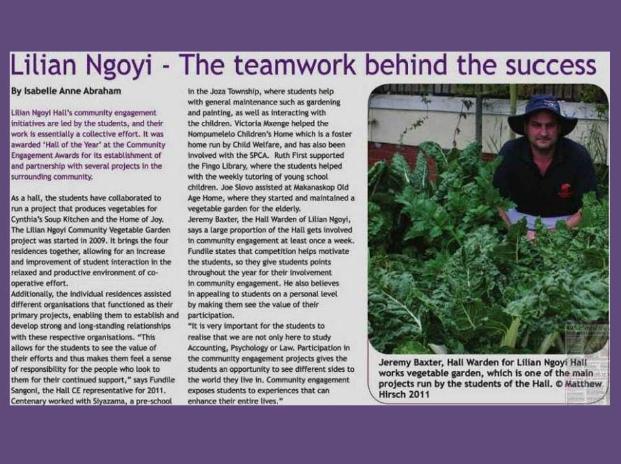 On the African continent where the shortage of food is particularly acute, celebrations were seen as a prime opportunity to increase public awareness of food problems on the African continent. “The day offers a unique opportunity to urgently raise awareness of the issues behind poverty and hunger, reflect on the rising tide of world hunger and take a fresh approach to agricultural and food security policy-making,” said the African Development Bank, a large investor in the continent’s agricultural sector and a major supporter of efforts to rid the continent of hunger.

Closer to home, learners from various Grahamstown schools, members of the community and municipal officials joined Umthathi Training Project (UTP) to celebrate the day and "to raise awareness of the circumstances of millions of people in the world who are going hungry every day".

According to Marlene Mitchener, director of UTP, about seven out of every 10 people live below the bread-line in the Eastern Cape. It was perhaps with the “food crisis” challenge in mind that the Lillian Ngoyi Hall students conceptualised and initiated a Hall Community Vegetable Garden project – a one-of-a kind student community engagement project at Rhodes University - at the beginning of the year.

Lilian Ngoyi is a new Hall, only constituted this year, and students wanted a unique project in which everyone could become involved. The Lillian Ngoyi Hall Community Vegetable Garden which came about following a spirited brainstorming session with community representatives, was formally launched in February 2009.

It is project that is led by the Hall Community Engagement Representative, Kiarin Gillies, and has been shepherded and underpinned by Dr Petra Gentz, a Claude Leon postdoctoral fellow in the Department of Biochemistry, Microbiology and Biotechnology, and Mr Jeremy Baxter, a lecturer in Statistics and also the Warden of Centenary House.

A Copper Collection was held in O-Week to start raising the required funds and a very successful fundraising drive took place outside Pick n Pay in March. A hollowed out watermelon, lined with tinfoil, made an amusing piggy bank, as did a rain gauge decorated as a carrot. Little bags of seeds were given to people who donated R10 or more, and chillis, from the prolific chilli plant in Petra's garden, were given away.

Sponsors such as Pennypinchers and Phoenix Roller Mills, amongst many others, gave generously, and 22 February saw the first sods of earth being turned. Eighty six students were there to help, and the first day's work involved digging out the ground for Phase 1 of the garden, and raising poles for shadecloth. The Lillian Ngoyi Hall students’ enthusiasm for the project has been maintained. On average between six and 18 students turn out on a Sunday to work in the garden.

The dedicated nurturing of the garden saw the first harvest gathered in just three months. As the Hall's community engagement project, one of the aims was to provide support and education to two organisations this year. Centenary House chose to support Margaret Ngcangca's House of Joy project in Joza. Margaret cares for 14 AIDS orphans, and the vegetables came as a welcome addition to her food supplies.

Ruth First House chose, as their project, Cynthia's Soup Kitchen, and vegetables were duly delivered to her in Fingo Village. It was at this point that the community representatives realised a further benefit of the project. With the knowledge they had gained by preparing and planting their garden from scratch, they were in an excellent position to offer advice to people wishing to do likewise. Cynthia in fact already had the beginnings of a vegetable patch of her own; with the help of the Lilian Ngoyi Hall students this was weeded and replanted with seeds and seedlings, and a hosepipe was donated to her. In turn, Margaret Ngcangca was also helped to set up her own garden, and both plots are now self-sustainable.

Phase 2, inaugurated later in the year, involved increasing the size of the plot, and was celebrated with a well-attended braai for the student volunteers. Petra and Jeremy have started work on a document detailing how to set up a garden of this nature, and hope that other Halls will take up the challenge. In the meantime, a huge variety of vegetables have been grown. Peas, spinach, tomatoes, carrots, garlic, broccoli, lettuce and radishes have all thrived and marigold borders keep out the slugs and insects in a truly organic manner. Four wild olive trees were dug in to celebrate Spring Day, and on Arbour Day the first fruit tree, a plum, was planted. 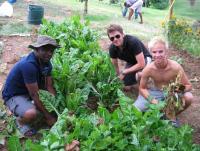 The Lilian Ngoyi Hall Community Garden seems set to thrive into the future.